Conversations in Science with Dan Rather & Jennifer Doudna: CRISPR

Conversations in Science with Dan Rather & Jennifer Doudna: CRISPR 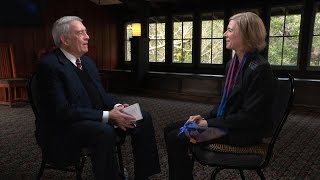 In the last few years, the term CRISPR has exploded on the global scene, and with it UC Berkeley professor Jennifer Doudna, one of the pioneers in the field, has emerged into the spotlight. From magazine covers, to news broadcasts, to social media, CRISPR is the rare scientific breakthrough that has captivated the interest of the general public. But what is CRISPR really? What are its implications now and into the future? What profound ethical questions are raised by this ability to so precisely and easily edit the genome? In a candid and far-ranging conversation with Dan Rather, Doudna leads viewers through a nuanced and captivating view of this new technology. And along the way she shares her own improbable journey into science and her lessons for others – especially young women – who want to follow in her footsteps.

About the speakers:
Jennifer Doudna is Professor of the Departments of Chemistry and of Molecular and Cell Biology at University of California, Berkeley and an Investigator of the Howard Hughes Medical Institute. Early in her career, she studied the structure and mechanism of ribozymes (enzymatic RNA molecules) and RNA-protein complexes. Now her research focuses on understanding how RNA molecules control gene expression in bacteria and eukaryotic cells, through CRISPR-Cas9 and RNA-mediated mechanisms, respectively. For her outstanding scientific contributions, she was elected into the American Academy of Arts and Sciences in 2002 and the National Academy of Sciences in 2003, and was awarded the 2015 Breakthrough Prize in the Life Sciences. Learn more about Jennifer Doudna’s research here: http://rna.berkeley.edu/

Dan Rather has a resume that reads like a history book. He has interviewed every American president since Eisenhower and personally covered almost every important global dateline of the last 60 years, from the Civil Rights Movement to Vietnam, to Watergate to the terrorist attacks of 9/11. Rather helped pioneer the very idea that television could be a place for news, and he has kept that spirit of innovation alive by constantly pushing the boundaries of what video storytelling could accomplish. His independent production company News and Guts specializes in high-quality non-fiction content across a range of traditional and digital distribution channels. He has a special interest in telling the stories of science. Learn more about Dan Rather’s production company here: http://www.newsandgutsmedia.com/