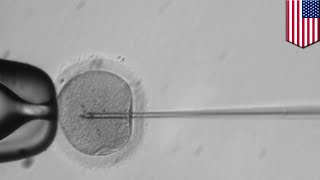 The team used a gene-editing technique called CRISPR, which is capable of finding a target DNA sequence and replacing it with a desired sequence. The technology is theoretically possible to modify the genomes of any living thing on earth.

Once injected, the guide RNA in the CRISPR-Cas9 system seeks out the target DNA before the Cas9 enzyme binds and cuts it. The void in the DNA strand is then filled with the desired sequence.

Researchers in China have previously conducted trials of CRISPR in cancer patients but the results revealed a major problem of the technique: it can cause unwanted mutations other parts of a DNA sequence. This effect is known as mosaicism.

However, the Portland team is confident that it is possible to avoid the errors by injecting CRISPR into the eggs at the same time they were fertilized with sperm.

“It is proof of principle that it can work. They significantly reduced mosaicism. I don’t think it’s the start of clinical trials yet, but it does take it further than anyone has before,” a scientist familiar with the project told MIT Technology Review.
—————————————-­———————

Go to https://www.patreon.com/tomonews and become a Patron now

TomoNews is now on Patreon and we’ve got some cool perks for our hardcore fans.

TomoNews is your best source for real news. We cover the funniest, craziest and most talked-about stories on the internet. Our tone is irreverent and unapologetic. If you’re laughing, we’re laughing. If you’re outraged, we’re outraged. We tell it like it is. And because we can animate stories, TomoNews brings you news like you’ve never seen before.

Get top stories delivered to your inbox everyday: http://bit.ly/tomo-newsletter
See a story that should be animated? Tell us about it! Suggest a story here: http://bit.ly/suggest-tomonews