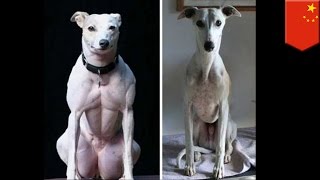 GUANGZHOU, CHINA — Scientists of the Key Laboratory of Regenerative Biology at the Guangzhou Institutes of Biomedicine and Health claim to be the first to use genome modification to double the muscle mass of dogs.

Their findings, recently published in the latest edition of the Journal of Molecular Cell Biology, have broken new ground in the field of genetic engineering. For this new research, the scientists used 65 beagle dog embryos, focusing in on genes encoded for myostatin, a protein that inhibits muscle growth. By injecting the enzyme complex CRISPR-Cas9 into the embryos, the objective was to knock out the myostatin genes in the DNA of the canines. With myostatin deleted, the beagles would be able to reach new levels of muscle growth.

The breakthrough study resulted in the births of 27 beagle puppies. The scientists report only two of them, a boy they named Hercules and a girl they named Tiangou, had disruptions in their myostatin genes. The researchers say that the gene editing turned out to be incomplete in Hercules, allowing for a percentage of his muscle cells to continue to produce myostatin. But with Tiangou, the gene editing was indeed complete, resulting in her thigh muscles growing to be significantly larger than those of her litter mates. The scientists say the dogs have more muscles and are expected to have stronger running ability, which could make for freakishly powerful hunting dogs and military canines.

In the past, the Chinese have performed gene editing on goats, rabbits, rats, monkeys and even human embryos. While the scientists say this particular study was undertaken to learn more about gene modification for human disease treatments, such as Parkinson’s and muscular dystrophy, it’s hard not to wonder what else they might do.

Welcome to TomoNews, where we animate the most entertaining news on the internets. Come here for an animated look at viral headlines, US news, celebrity gossip, salacious scandals, dumb criminals and much more! Subscribe now for daily news animations that will knock your socks off.

Get top stories delivered to your inbox everyday: http://bit.ly/tomo-newsletter

No items were found.