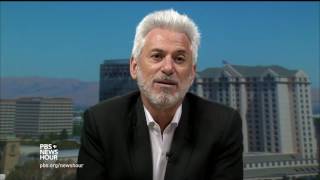 Imagine you could edit a mouse’s genes to be resistant to Lyme Disease. The mouse would breed and evolution would take its course, leading to the extinction of the disease. That’s the vision for scientists developing CRISPR, technology that allows scientists to rewrite the code of life. William Brangham talks to Michael Specter who wrote about CRISPR for The New Yorker.