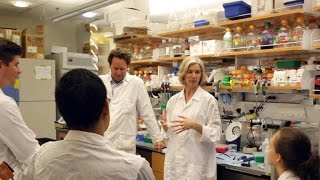 CRISPR could help rid of diseases like cystic fibrosis, muscular dystrophy and even HIV and cancer. But many scientists, including Jennifer Doudna who is credited with developing the gene-editing technology, are calling for a moratorium on its use. Only on “CBS This Morning,” Doudna tells Norah O’Donnell why, for all its promise, CRISPR is surrounded by controversy.