What is CRISPR? Animation.

What is CRISPR? Animation. 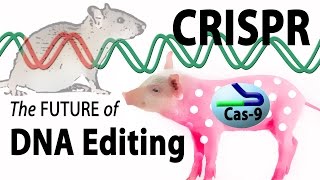 How CRISPR/Cas-9 System Works. Why CRISPR is UNLIKE any other DNA editing tools ever discovered? The future of genetic engineering.
This video and other related images/videos (in HD) are available for instant download licensing here : https://www.alilamedicalmedia.com/-/galleries/all-animations/cell-molecular-biology-genetics-videos
Voice by: Sue Stern
©Alila Medical Media. All rights reserved.
CRISPR is the newly discovered revolutionary tool that would allow scientists to change at will any DNA sequence of, presumably, any living organism in a precise manner. Unlike any other previously developed techniques of gene editing, CRISPR is REMARKABLY simpler, faster and cheaper.
CRISPR is part of a naturally occurring defense mechanism found in many bacteria. The bacteria use CRISPR to SPECIFICALLY snip the DNA of invading viruses. CRISPR stands for “Clustered Regularly Interspaced Short Palindromic Repeats” – a region of bacterial genome that contains short DNA repeats with unique sequences, or spacers, in between. These spacers are derived from DNA of viruses that prey on the bacteria. The CRISPR region is essentially a DNA library of all enemies that need to be RECOGNIZED and destroyed. After being transcribed, individual pieces of spacer RNAs form complexes with a protein named Cas, for CRISPR-ASsociated protein. Cas is an endonuclease – an enzyme that cuts DNA. These RNA/protein complexes then drift through the cell, looking for matching viral DNA. If a match is encountered, the RNA latches on, base-paring with it; Cas protein then cuts the viral DNA, disabling the virus.
Scientists have isolated this system, and by designing their own spacer-RNAs, they can, in theory, target any DNA sequences in any organism. The system has indeed worked in all organisms tested so far. The current CRISPR system consists of two components: a guide RNA and a Cas protein named Cas9. The guide RNA is a short synthetic RNA composed of a “scaffold” sequence necessary for Cas9-binding and a user-defined “spacer”, or “targeting” sequence of about 20 nucleotides long.
Applications of the CRISPR system:
– Disabling, or knock-out, a particular gene: After Cas-9 cuts the DNA, the cell would try to repair the break. The more efficient repair pathway in the cell is ERROR-PRONE and would most likely result in a loss-of-function mutation in the gene of interest. As CRISPR modifies BOTH copies of the gene at the same time, generation of knock-out animals and cell lines for gene function studies has never been more efficient. Moreover, MULTIPLE genes can be targeted in one manipulation, making this technique an extraordinarily powerful tool for studying complex genetic traits or diseases that involve many genes.
– Introducing precise modifications to the target DNA: If a desired DNA sequence is provided together with the CRISPR/Cas-9 system, it can be used by ANOTHER repair pathway as a TEMPLATE to reconstruct the disrupted gene sequence. The desired changes stay permanently and are also transmitted to future generations.
– Modifications to the Cas9 enzyme have extended the application of CRISPR to selectively turn ON and OFF target genes, fine-tune their expression WITHOUT permanently altering the gene sequence.
Since its discovery, CRISPR technology has been used extensively in animal research to engineer disease-resistant livestock; bring back extinct species; introduce deleterious genes into malaria-carrying mosquitoes; and modify pig genome to make pig’s organs suitable for transplant into human. CRISPR has also been employed to create “custom designed” pets such as mini-pigs with customized coat patterns, colorful koi fish and dogs with certain desirable traits. The CRISPR zoo is growing rapidly but so are the ethical concerns and fears of possible ecological disasters.
In human, while CRISPR is proven to be a powerful tool to study various diseases, it is deemed NOT YET ready for clinical applications. Modification of human germlines to alter genetic heritage of future generations may also lead to unwanted consequences and is prohibited by most countries.