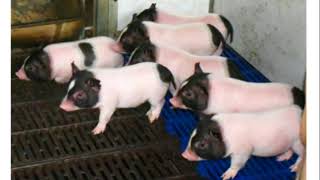 Chinese scientists have created low-fat pigs using new genetic engineering techniques. In a paper published in the Proceedings of the National Academy of Sciences, the scientists report that they have created 12 healthy pigs with about 24 percent less body fat than normal pigs.

The scientists created low-fat pigs in the hopes of providing pig farmers with animals that would be less expensive to raise and would suffer less in cold weather. The animals have less body fat because they have a gene that allows them to regulate their body temperatures better by burning fat. That could save farmers millions of dollars in heating and feeding costs, as well as prevent millions of piglets from suffering and dying in cold weather. The Chinese scientists created the animals using a new gene-editing technique known as CRISPR-Cas9. It enables scientists to make changes in DNA much more easily and precisely than ever before. Pigs lack a gene, called UPC1, which most other mammals have. The gene helps animals regulate their body temperatures in cold temperatures. The scientists edited a mouse version of the gene into pig cells. They then used those cells to create many cloned pig embryos. Next, scientists implanted the genetically modified cloned pig embryos into 13 female pigs. Three of the female surrogate mother pigs became pregnant, producing 12 male piglets.
News Sources:
https://science.slashdot.org/story/17/10/23/2112231/chinese-scientists-create-genetically-modified-low-fat-pigs
http://www.pnas.org/content/early/2017/10/17/1707853114