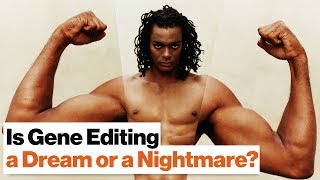 Jennifer Doudna was a pioneer of CRISPR, which is a gene-editing technology that is being increasingly studied and used across the world. Jennifer relates the genesis of CRISPR to us and explains the pros and cons of giving birth to such a potentially world changing process. On the positive side, she tells us how scientists are already combining her technology with stem cell research to potentially rid the world of sickle cell anemia. On the negative side, she describes a vivid nightmare she had early on in the process wherein she meets Hitler with a pig nose—a David Lynch-ian vision that represents the negative possibilities of what could happen if CRISPR falls into the wrong hands. While the Pig Hitler scenario is a lot less likely to actually happen, Jennifer understands the duality of her role in CRISPR’s creation.

Jennifer Doudna’s most recent book is A Crack in Creation Gene Editing and the Unthinkable Power to Control Evolution.

Transcript: Well, CRISPR is an acronym that actually represents a sequence of DNA letters in the genomes themselves. It is found in bacteria and it was interesting to scientists originally because it’s a bacterial immune system, a way that bacteria can fight viral infection. But the CRISPR acronym has now become widespread in the media as an indication of a new technology for gene editing. And the story of how an adaptive immune system and bacteria was harnessed as a technology for gene editing is really part of what A Crack in Creation is about.

So the CRISPR gene editing technology is a tool that scientists can use to change the letters of DNA in cells in precise ways. So I like to use the analogy of a word processor on our computer. So we have a document, you can think about the DNA in a cell like the text of a document that has the instructions to tell the cell how to grow and divide and become a brain cell or a liver cell or develop into an entire organism. And just like in a document the CRISPR technology gives scientists a way to go in and edit the letters of DNA just like we might cut and paste text in our document or replace whole sentences even whole paragraphs or chapters. We can now do that using the CRISPR technology in the DNA of cells.

So, we think about a technology that allows precise changes to DNA to be made, for scientists this is sort of really a gift that allows research to proceed very quickly in terms of understanding the genetics of cells and organisms, but also provides a very practical way to solve problems. There’s many that we could discuss, but I’ll mention a couple that I think are particularly exciting.

So in clinical medicine, the opportunity to make changes to blood cells that would cure diseases like Sickle Cell Anemia disease, where we’ve understood the genetic cause or for a long time but until now there hasn’t been a way to actually think about treating patients. And now with this technology it’s possible, in principle, to remove stem cells that give rise to blood cells in a person’s body, make edits to those cells that would correct the mutation causing Sickle cell disease and then replace those cells to essentially give a patient a new set of cells that don’t have the defect. So I think that’s very exciting, and there are multiple research groups right now working on doing just that. So I think that’s a future probably sometime in the next two to five years we will see clinical trials in that area, and we hope a real progress toward curing that disease.

But another example that I think is also potentially very impactful clinically—but it has a very different kind of strategy—is the idea of making edits to pigs to create animals that are going to be better organ donors for humans. And so pigs are already of interest for organ donation, but imagine that we could make edits to the DNA of pigs to make their organs more human like and also to remove any viruses from pig cells that might otherwise infect a patient and those are both things that are actively underway using the CRISPR technology.