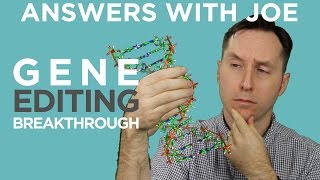 Genetic editing has been the holy grail of medicine since DNA was discovered, but remained mostly out of reach. But a new technique called CRISPR/Cas9 could change that – and make some of the worst diseases a thing of the past.

Here’s how it works:

When we get sick, we have our immune system to create antibodies to prevent us from getting sick again. But how does a single-celled bacteria do the same trick?

It collects tiny markers of viruses that attack them and incorporates those markers into its own DNA so it can better fight off the virus later.

Jennifer Doudna, one of the discoverers of this system, called it a “molecular vaccination card”.

And the mechanism that the bacteria use to cut chunks of DNA and replace it is a protein called Cas9.

But the cool thing about Cas9 is that it’s programmable, which means if we could program it to, say, go take out a cancer gene, or multiple sclerosis, or ALS, etc. etc., We could cure just about any disease.

It could be a standard part of prenatal care, they collect some stem cells and test for major diseases and treat the fetus in utero.

The treatment options this creates for current conditions are incredible, In time, we may even be able to correct aging itself. Human lifespans may be about to take a huge leap.

This technology is still in its very infancy, but Jennifer Doudna said that clinical trials and maybe even viable therapies could be available in the next 10 years.