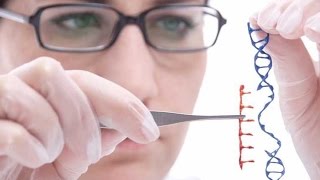 Humanity towards immortality,
The gene-editing technology on humans

Chinese scientists have become the first in the world to inject an adult human with cells that have been genetically edited using the revolutionary CRISPR/Cas9 technique. The CRISPR-edited cells were injected on October 28 by a team from the Sichuan University in Chengdu, as part of a clinical trial against aggressive lung cancer – and experts think it could trigger a biomedical race between the US and China. If you haven’t heard of CRISPR as yet, Here are some insights
Genome editing, or genome editing with engineered nucleases (GEEN) is a type of genetic engineering in which DNA is inserted, deleted or replaced in the genome of a living organism using engineered nucleases, or “molecular scissors.” These nucleases create site-specific double-strand breaks (DSBs) at desired locations in the genome. The induced double-strand breaks are repaired through nonhomologous end-joining (NHEJ) or homologous recombination (HR), resulting in targeted mutations, There are currently four families of engineered nucleases being used: meganucleases, zinc finger nucleases (ZFNs), transcription activator-like effector-based nucleases (TALEN), and the CRISPR-Cas system,
The CRISPR-Cas system was selected by Science as 2015 Breakthrough of the Year.

The new gene-editing technique is poised to revolutionize the way we treat disease, by offering scientists a quick and easy way to cut and paste genes from our DNA. The CRISPR-Cas9 system consists of two key molecules that introduce a change (mutation) into the DNA. These are , an enzyme called Cas9. This acts as a pair of ‘molecular scissors’ that can cut the two strands of DNA at a specific location in the genome so that bits of DNA can then be added or removed and a piece of RNA called guide RNA (gRNA). This consists of a small piece of pre-designed RNA sequence (about 20 bases long) located within a longer RNA scaffold. The scaffold part binds to DNA and the pre-designed sequence ‘guides’ Cas9 to the right part of the genome. This makes sure that the Cas9 enzyme cuts at the right point in the genome.
The guide RNA is designed to find and bind to a specific sequence in the DNA. The guide RNA has RNA bases that are complementary to those of the target DNA sequence in the genome. This means that, at least in theory, the guide RNA will only bind to the target sequence and no other regions of the genome.
The Cas9 follows the guide RNA to the same location in the DNA sequence and makes a cut across both strands of the DNA.
Researchers just need to program it, and it can cut out certain genes – or add new ones – far more cheaply and quickly than any previous genetic tools. Since the potential of the system was discovered back in 2012, it’s already been tested widely in animals, and in January this year, it was used to successfully treat its first disease in mice, Duchenne muscular dystrophy. There have also been CRISPR experiments done in non-viable human embryos, which were never brought to term. But this is the first time that cells edited by CRISPR have ever been injected into an adult human. The trial was carried out at the West China Hospital, and involved a patient with aggressive lung cancer. The researchers extracted the patient’s immune cells from a blood sample and then used CRISPR editing to disable a gene in them. The gene that was turned off codes for a protein called PD-1, which usually slows down a cell’s immune response, allowing cancer to grow out of control. These PD-1-free immune cells were then cultured in the lab and injected back into the patient. The aim is that they’ll now proliferate in the patient’s body and attack and destroy cancerous cells. It’s still early days, but lead researcher Lu You told David Cyranoski at Nature that the initial treatment went well, and the patient is now ready for a second injection. Across the duration of the trial, which received ethics approval in July, the team aims to treat a total of 10 people, with between two and four injections of genetically edited immune cells each. And they’re not the only ones planning to use CRISPR on humans – the US has a similar trial against various cancers in the works, which is scheduled to start in early 2017, and has been funded by Napster billionaire Sean Parker. And China has another three clinical trials planned for March 2017
https://en.wikipedia.org/wiki/Genome_editing
http://www.yourgenome.org/facts/what-is-crispr-cas9