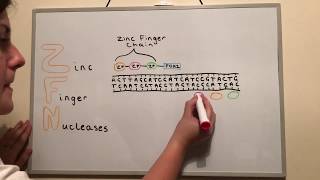 Engineered nucleases are what researchers use to edit genomes.

The first family of these nucleases to be used was the ZFNs. ZFN stands for Zinc Finger Nucleases. These are artificial and are made up of a chain of proteins called zinc fingers with an enzyme, FOK1, attached at the end of this chain. Zinc fingers recognise and bind to specific triplets of DNA bases. The FOK1 enzyme comes from bacteria and is an endonuclease, meaning it cuts the DNA with precision at certain, recognised sequences. When the ZFN is in place on both strands of the DNA, the FOK1 molecules form a dimer, activating the enzyme and the midsection is cleaved creating a double stranded break.

After ZFNs, the use of TALENs as a way to edit genomes was discovered. TALEN stands for Transcription Activator-Like Effector Nuclease. These were discovered in bacteria that infect plants. They consist of a string of TAL effectors with, again, the FOK1 endonuclease attached at the C-terminus of the protein chain. The way in which they cleave DNA is very similar to ZFN. The TAL effectors bind to the DNA, however they recognise individual nucleotides rather than triplets. The partner molecules bind to the other strand and the attached FOK1 molecules slice the strands resulting in a double stranded break.

Most recently, researchers identified the revolutionary potential of the CRISPR Cas9 system. CRISPR stands for Clustered Regularly Interspaced Short Palindromic Repeats. It comes from a method used by bacteria to combat infection by viruses. It’s composed of Guide RNA, or gRNA, and Cas9 endonuclease. The gRNA has a complementary sequence that matches with DNA at a precisely chosen location. This location can be controlled by altering the RNA sequence, which is what makes CRISPR so useful. The Cas9 unzips the DNA, helps pair the gRNA with the corresponding base pair sequence and then cuts the DNA, breaking the double strand.

The double stranded breaks created by each of these mechanisms is corrected using the cells own repair methods. If no homologous DNA is present, the cell uses the Non-Homologous End Joining method. The ends of the DNA are simply ligated back together which in turn, introduces small insertion or deletion mutations which can affect the function of the gene allowing researchers to better understand gene control. If a repair template is present, the cell can use Homology Directed Repair. The template sequence will match that of the area that surrounds the double stranded break and so is much more accurate meaning that specific sequence changes can be introduced in to the desired gene.