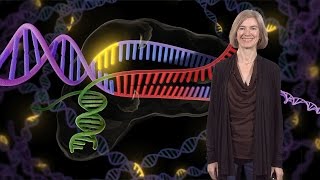 Talk Overview:
Jennifer Doudna tells the story of how studying the way bacteria fight viral infection turned into a genomic engineering technology that has transformed molecular biology research. In 2013, Doudna and her colleagues developed the CRISPR-Cas9 gene expression system that, when introduced into animal cells, makes site-specific changes to intact genomes. CRISPR-Cas9 is more precise, more efficient, and less expensive than other genome editing tools and, as a result, has facilitated a wide range of studies that were previously unachievable.

Speaker Biography:
Jennifer Doudna is Professor of the Departments of Chemistry and of Molecular and Cell Biology at University of California, Berkeley, and an Investigator of the Howard Hughes Medical Institute. Early in her career, she studied the structure and mechanism of ribozymes (enzymatic RNA molecules) and RNA-protein complexes, such as the signal recognition particle. Now her research focuses on understanding how RNA molecules control gene expression in bacteria, through the CRISPR-Cas9 system, and eukaryotic cells, through RNA interference and microRNA-mediated translational control. For her outstanding scientific contributions, she was elected into the American Academy of Arts and Sciences in 2002 and the National Academy of Sciences in 2003, and was awarded the 2015 Breakthrough Prize in the Life Sciences.