CRISPR Babies: Eugenics, Ethics, and Why Regulation Efforts Could Be Too Late

CRISPR Babies: Eugenics, Ethics, and Why Regulation Efforts Could Be Too Late 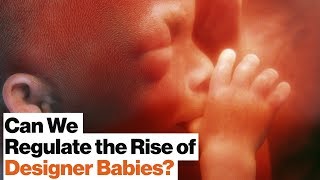 Well, when we think about designer humans or “CRISPR babies” as we’ve seen in the media, this sparks some people’s imagination to think about what one might want to do with a technology like this, maybe not today and maybe not next year but in the future.

And it’s one thing to talk about being able to remove mutations from the human population that cause genetic disease—and I think for many people that would be a desirable thing to do—On the other hand I think it’s a very different discussion to think about using a technology like this to create enhanced human beings, people that are taller or have a certain eye color or other kinds of physical or intellectual traits that might be considered desirable.

And it sort of immediately brings up sort of the whole area of eugenics and sort of access to technology, who gets access, who pays for it, who decies? Who decides whether or not to do such a thing? Should companies be allowed to offer this as a service to parents who want to do this so should they be regulated in some way? There’s a lot of very interesting and challenging questions I think that go along with that. And then there’s the whole question of, since this is a technology that is widely available—I really call it a democratizing technology because it’s not very expensive to use and labs worldwide have been able to easily deploy it in different systems—So then how do we think about a global regulation?

Is it even possible to come to some kind of consensus globally? I’m not sure, honestly, of the answer to that.

I think that it’s certainly important to be having this discussion with our colleagues in other countries and fortunately that’s happening.

But are we going to be able to control what people are doing in every jurisdiction? I think no way, and so I think it’s one of those things that it’s one of the aspects of this technology that we have to grapple with, is the fact that it’s widely available and that people will start using it in different ways, potentially even in the future to create genetically altered humans.