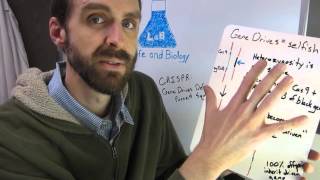 Life and Biology – Episode 015 – CRISPR: Gene Drives Defeat Punnet Squares
Dr. Joel Graff
In this episode, I explain what would typically happen if an organism with a novel trait was released into the wild (it gets diluted out) versus what happens when the novel gene is driven by the CRISPR system (it spreads to all the population).