gene editing tool CRISPR will bring back the Woolly Mammoth

gene editing tool CRISPR will bring back the Woolly Mammoth 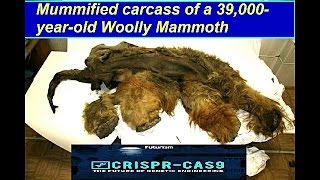 “Woolly mammoths” could be brought back from extinction within two years, the scientists behind a groundbreaking resurrection project have said.

World-renowned geneticist Prof George Church and his team at Harvard University have been working for the past two years on recreating the DNA blueprint of the mammoth.

They have used DNA from mammoths that were preserved in Arctic permafrost to look for the genes that separated them from elephants, such as those with code for a shaggy coat, big ears and antifreeze blood.

Targeted, genetic modification in humans is no longer in the realm of science fiction. Both the UK and US governments have approved the use of a cheap and accurate DNA-editing technique called CRISPR-Cas9 in human embryos and adults. The technique allows scientists to edit genes with unprecedented precision, efficiency, and flexibility.