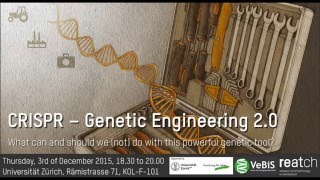 CRISPR, the next stage of genetic engineering?
In 2013, researchers announced a fast and precise new method for editing the genetic code – much more powerful than all other genetic tools so far known. The so-called CRISPR (Clustered Regularly Interspaced Short Palindromic Repeats) system takes ad- vantage of an antiviral defence strategy used by bacteria and allows precise genetic manipulations in a wide range of different species.
This genetic method has caused a massive hype in genetic research and already spawned many start-up companies and impressive venture capital investment, since it could make the old dream of genetic therapy finally come true. Chinese researchers have even tried to alter the genetic code of human embryos using CRISPR, triggering an ethical debate among scientists and ethicists alike and stirring up fears of a long neglected taboo: the (non-therapeutic) genetic engineering of humans.
Martin Jinek studied Chemistry and Natural Sciences at the University of Cambridge (UK) and is currently assistant professor in the department of Biochemistry at the University of Zurich. He authored the first scientific publication that proposed the use of the CRISPR system for genome editing.
Effy Vayena studied Medical History and Bioethics at the University of Minnesota (USA). She currently leads the newly established Health Ethics and Policy Lab in the Department of Public Health at the EBPI, University of Zurich, and was recently appointed a Swiss National Science Foundation Professor of Health Policy.