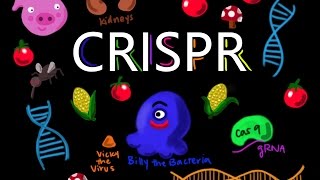 This is the Grand Prize Winner of 2016 ASHG Teen Genes Competition. Thank you!

This video is created from over 1,000 frames used in clay stop motion. Approximately 30 figures were sculpted in the course of two months, and some images were digitally edited for special effects (i.e. a flying mosquito). Special digital effects included: glare removal, background stabilization, and erasing foundations for objects that seemed to be flying. Thank you for watching!

The newly discovered CRISPR/Cas 9 method of gene editing has opened up endless possibilities in the world of biotechnology, made possible due to the discovery of the method by Jennifer Doudna and Emmanuelle Charpentier. This method has already proven to be very versatile in current applications of genetics, and shows a promising future for gene editing.