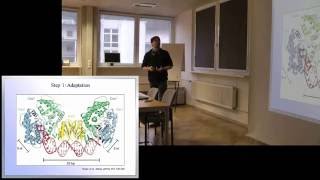 The CRISPR-Cas system was originally discovered as an adaptive immune system of bacteria and archaea to protect against viral attack.
It is characterized by three major principles:
– Integration of foreign (viral) DNA into the bacterial CRISPR locus (Clustered Regularly Interspaced Short Palindromic Repeats) upon first infection
– Transcription of the integrated viral DNA to use it for labelling of repeatedly entered viral DNA via base pairing
– Destruction of the labelled viral DNA by Cas (CRISPR associated) nucleases

During this talk, given at Leica Microsystems in Wetzlar, Dr. Lennart Randau, MPI Marburg, presents this simple and fascinating system in detail. Furthermore, he introduces the adaption of the CRISPR-Cas system into a potent molecular biology tool, which is nowadays used heavily for genome editing. In addition to its influence on molecular biology, meanwhile the Cas9 nuclease also stimulates microscopy techniques e.g. to fluorescently label genomic loci in living cells.