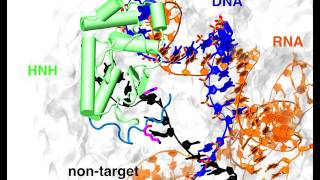 Cas9 Enzyme Approaching DNA, with the CRISPR Region in Red. The CRISPR-Cas9 system is emerging as a transformative genome-editing tool. Here, Palermo et al. report the first biophysical study – based on multi-microsecond atomistic simulations – that details the conformational plasticity of the endonuclease Cas9 and its interplay with the nucleic acids. The study reveals a striking flexibility of the nuclease domain HNH as an essential element for its repositioning during the catalysis, while the non-target DNA strand is identified to be key in favoring the formation of a catalytically competent Cas9.