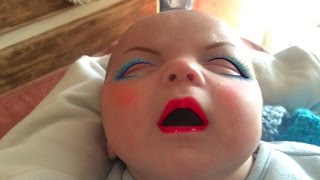 From big data to toys that will tell on you for doing something naughty to advanced ways to edit your genome, these are the top 7 CREEPIEST Future Technologies Coming Our Way.

You head into your local coffee shop one morning and the barista greets you. “Hey Nathan, how you doing today, how’s the awesome Youtube channel going?” Nothing out of the ordinary there right? You’ve visited before and talked a whole bunch of times. But what if the same thing happened in a store you’ve never been to, in a city
on the other side of the world?

In 2015 Notre Dame’s Reilly Center for Science, Technology and Values compiled a list of 10 ethical dilemmas facing humanity from science and technology in the coming year. And alongside lethal weapons, womb experiments, drones and head transplants was this lady. Barbie.

As the internet of things and big data become increasingly prevalent more and more companies are learning the value of accurate information, and how they can use that information to sell you things.

Big deal. I’ll just take the lenses out, head into the countryside and take a nap against this lovely looking tree here. Ah, what a relaxing day…until that is an advert for the new Adam Sandler movie starts, but where’s it playing from? Oh that’s right, it’s coming from my bones!

In 2015 a tool called CRISPR was developed which is capable of editing human genomes, potentially clearing the way for defect removal, disease immunity, and designer babies. Genome editing is nothing new, but CRISPR allows you to manipulate genes with far greater accuracy than ever before.

Before we can use CRISPR technology to create super healthy mutant babies, human beings just have to deal with disease and sickness as best we can. But soon we may be able to accurately predict exactly who is more likely to get sick, using something called Rapid Whole-Genome Sequencing.