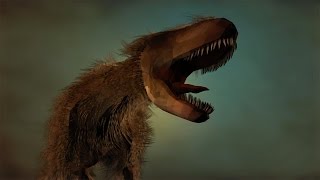 This spellbinding animation from the Museum’s new exhibition “Dinosaurs Among Us” traces the evolutionary transition from dinosaurs to birds.

Learn more about “Dinosaurs Among Us”: http://www.amnh.org/exhibitions/dinosaurs-among-us

The mass extinction that erased most dinosaurs 65 million years ago left a few bird lineages unscathed. Within only 15 million years all of our familiar bird groups were flourishing. These extraordinary living dinosaurs provide a vivid link to the ancient past.

The Museum’s new exhibition, “Dinosaurs Among Us,” explores the continuities between living dinosaurs—birds—and their extinct ancestors, showcasing remarkable new evidence for what scientists now call one of the best-documented evolutionary transitions in the history of life.

The Museum gratefully acknowledges the Richard and Karen LeFrak Exhibition and Education Fund.

Dinosaurs Among Us is proudly supported by Chase Private Client.

Additional support is generously provided by Dana and Virginia Randt.