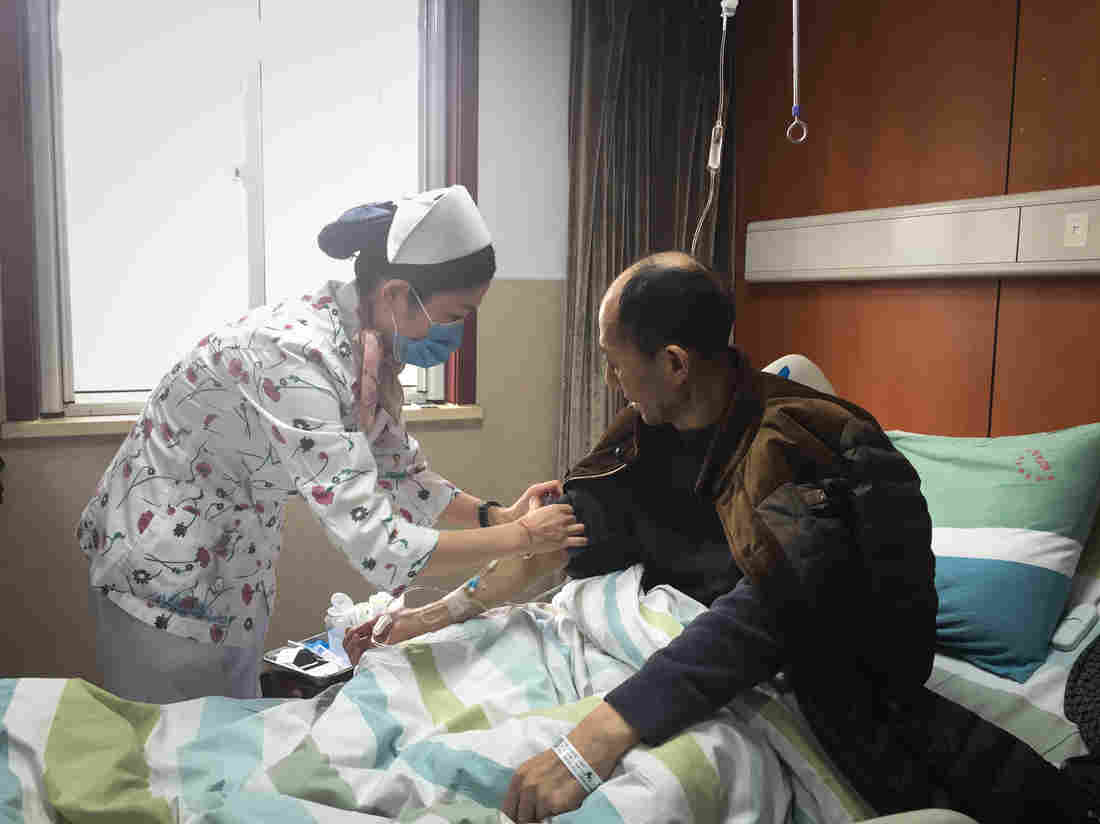 Shaorong Deng gets an experimental treatment for cancer of the esophagus that uses his own immune system cells. They have been genetically modified with the gene-editing technique known as CRISPR.

Shaorong Deng is sitting up in bed at the Hangzhou Cancer Hospital waiting for his doctor. Thin and frail, the 53-year-old construction worker’s coat drapes around his shoulders to protect against the chilly air.

Deng has advanced cancer of the esophagus, a common form of cancer in China. He went through radiation and chemotherapy. But the cancer kept spreading.

So he’s back at the hospital to get an experimental treatment. It involves using cells from his own immune system, known as T cells, after they have been taken out of his body and genetically altered in a lab by the gene-editing tool called CRISPR.

“I consider myself very lucky,” Deng says through an interpreter as a nurse finishes taking his blood pressure.

Just then, the door swings open and the nurse rushes back in. She’s cradling a clear plastic pouch filled with a yellowish fluid. She hangs the pouch above Deng’s bed, attaches one end of an intravenous tube to the bottom, and slides a long needle at the other end into Deng’s arm.

“This is the T-cell infusion,” says Dr. Shixiu Wu, who’s president of the cancer hospital in Hangzhou, a little over a hundred miles southwest of Shanghai. “Now it begins — getting the immune cell therapy.”

Deng stares at the IV as millions of genetically modified immune system cells slowly drip into his body. The infusion will take at least an hour.

Deng is participating in what Wu says is the most advanced study in China testing CRISPR in sick people. But at least eight other Chinese studies of CRISPR for various forms of cancer are listed on a U.S. government website that serves as a clearinghouse for biomedical research worldwide. The list includes studies of CRISPR as a treatment for cancers of the lung, bladder, cervix and prostate.

In contrast, only one CRISPR cancer study has been approved in the United States, and it’s only just now starting to look for the first patient to treat. 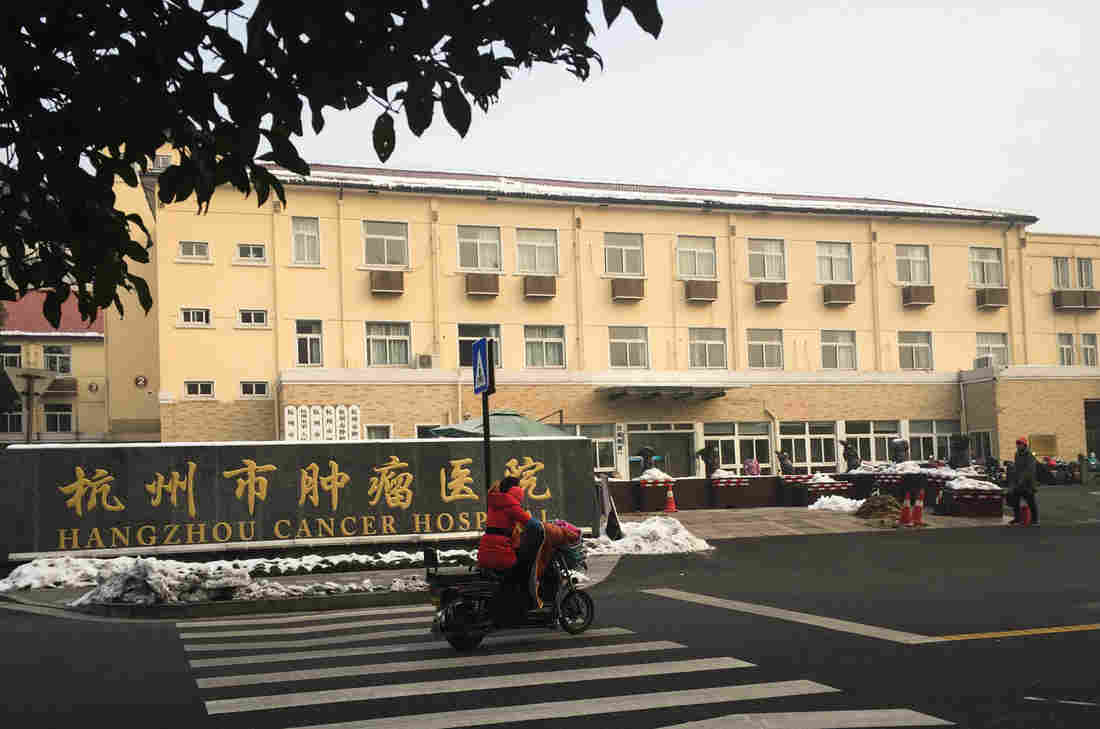 The Hangzhou Cancer Hospital in Hangzhou, China, is forging ahead with CRISPR treatment for cancer.

“China is starting to pull ahead of other parts of the world — maybe for the time — in regards to biomedicine,” says Hallam Stevens, an anthropologist at the Nanyang Technological University in Singapore who studies Chinese bioscience. “They’ve been really investing heavily in it over the last couple of decades and it’s starting to pay off in a big way.”

The treatment Wu is testing involves taking a sample of blood from each patient. A lab at a biotech company two hours away by bullet train extracts T cells from the blood. Scientists then use CRISPR to knock out a gene in the T cells known as PD-1. This engineering feat modifies the T cells so that they zero in on and attack the cancer cells, once they’re infused back into each patient.

Deng was returning to the hospital to receive his second infusion of gene-edited T cells. When he first arrived at the hospital about a month ago, he was so weak he needed a wheelchair. But Deng says he started feeling better soon after his first infusion.

“I feel very stable,” Deng says. “I was weak in the limbs before and now I am not weak anymore.”

It’s still too early to draw firm conclusions about how effective the treatment will be. Or what the full extent of side effects from it. Deng is one of just 21 patients with advanced, incurable cancer of the esophagus that Wu has treated so far with CRISPR-edited T cells.

But Wu says about 40 percent of the patients appear to have responded. One patient is still alive almost a year later.

There’s no randomized comparison group in this study. But usually, such patients would have no hope, Wu says. “If they have not received this treatment they will die — most of them will die in three to six months,” he says.

Wu says he’s writing up the results for a scientific publication. But these results have not yet been peer-reviewed or published.

So far, Wu says the only side effects have been mostly minor — an occasional fever or rash. Nine patients in the study have died, but Wu says that was from their cancer, not the treatment. One patient discontinued treatment because of a high fever. The rest appear to be stable or in “partial remission,” Wu says. They are undergoing monthly treatments.

“As a cancer doctor, you see many deaths,” Wu says “So it’s good to be part of this.”

“China sees biomedicine as one way it can compete with the West and show off its technological prowess and scientific chops in the 21st Century,” Stevens says. “It’s also something that’s going to be critical for keeping China’s population healthy in the 21st century.”

In general, medical research in China isn’t as stringently regulated as in the West, Stevens says. “It begins at a different starting point.”

In the West, there is a history of awareness about the dangers of medical experimentation run wild, he says, going back to the Nazi era and also the notorious syphilis study at Tuskegee University in Alabama, where doctors withheld treatment from black men for decades.

“Rather than having the starting point being: ‘This could be dangerous or this could be risky for people and we need to take that concern uppermost,’ ” Stevens says. “They start with the premise: ‘This is going to be beneficial for China.’ “ 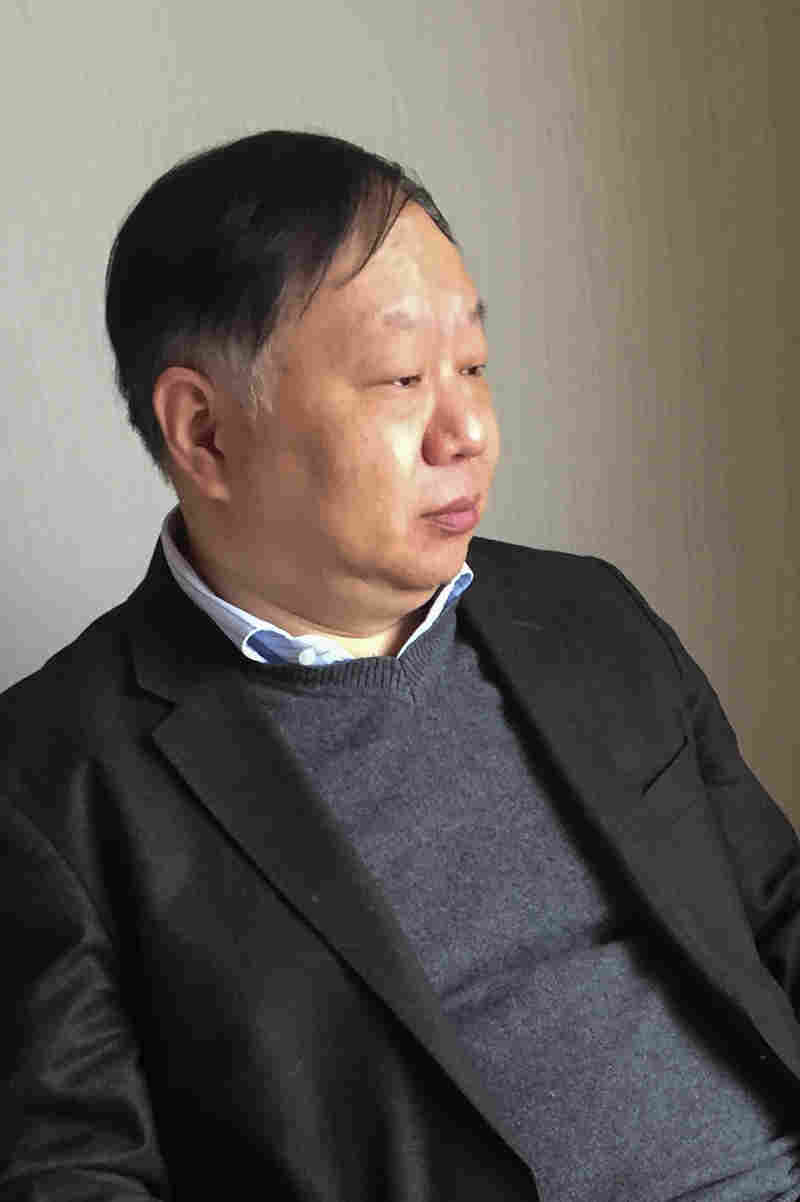 “If they have not received this treatment they will die — most of them will die in three to six months,” says Dr. Shixiu Wu.

“Chinese patients want to be cured very much,” Wu says. “There’s a Chinese saying: A living dog is better than a dead lion. So patients are willing to try new cures. That’s why the ethics committee and the lab are very positive about this.”

But the less stringent oversight makes doctors and bioethicists worry that some Chinese doctors may be rushing ahead too quickly, possibly putting patients at risk.

“My concern is: Are we really ready? There so much about CRISPR that we don’t understand,” says Lainie Ross, a bioethicist the University of Chicago. “We could be doing more harm than benefit. We need to very, very cautious. This an incredibly powerful tool.”

Ross noted that there are already drugs available that work that harness the immune system in the same way as Wu is trying to use CRISPR.

“One concern is: If you could do this with a medication rather than CRISPR, are you actually telling the participants about the alternative?” Ross says. “We have safe and effective FDA-approved drugs that could do the same thing. Are they being informed properly?”

“China’s like the Wild West,” says Dr. Carl June, a University of Pennsylvania scientist involved in the U.S. study of CRISPR to treat cacner that’s finally starting after nearly two years of much more intense review than Wu’s study in China.

The Penn study was evaluated by two federal agencies — the Recombinant DNA Advisory Committee and the Food and Drug Administration — as well as two separate committees at his hospital before getting the go-ahead.

“China has made this a very high priority — a national priority to develop this,” June says. “There’s some very high-quality research in China, and then there are others that are not high quality.”

June doesn’t have any specific concerns about Wu’s study and doesn’t think the U.S. should relax its safeguards to protect patients. But he worries the U.S. is falling behind like it did at the beginning of the space race.

“It’s kind of like Sputnik 2.0,” June says, referring to the Soviet satellite that shocked the United States when it became the artificial satellite to orbit the Earth.

“CRISPR technologies have created a Sputnik moment where vast new improvements can occur if we focus on them and make it a priority,” June says. “I want it to be done safely. But I want it to be a high priority.”

And June would like to see a level playing field where researchers around the world follow the same rules.

For his part, Wu stresses doctors explained all the possible risks to the patients very carefully before proceeding. And he’s already started treating patients with another kind of cancer — cancer of the pancreas.

“We [are] just beginning. We should improve it to get more benefits for the patients,” Wu says. “If you don’t try it, you’ll never know.”

“I’ve never worried about this,” Deng says. “I believe in science.”