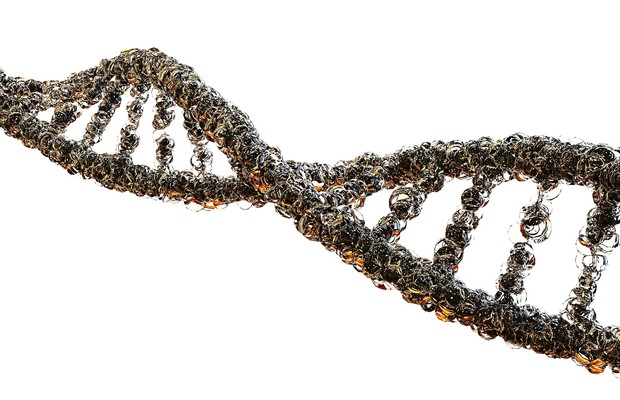 COLUMBUS, Ohio—Even as CRISPR gene-editing technology is offering insights into genetic diseases, researchers are discovering new things about how it actually works.

In the first of two papers just published in the Journal of the American Chemical Society (JACS), researchers at The Ohio State University report that they’ve figured out the mechanism by which the CRISPR gene-editing enzyme Cas9 determines where and when to cut DNA strands—a discovery that could help prevent gene-cutting errors.

In the second paper, they overturn the widely held belief that Cas9 cleaves DNA evenly—that is, cuts both sides of the DNA “ladder” to the same length—by demonstrating that it actually trims one side shorter than the other. That discovery could come in handy for the field of gene-editing and for manipulating DNA for biotechnology applications.

Zucai Suo, professor of chemistry and biochemistry at Ohio State, leads the project.

“The gene-editing enzyme Cas9 has been widely and successfully used in biotech and agriculture as well as drug discovery,” Suo said. “I hope that our work paves the way for scientists to minimize or eliminate gene-editing errors and discover new applications for Cas9.”

The CRISPR system mimics a technique that bacteria use against attacking viruses, and is considered revolutionary because it is the first technology that can edit the DNA of a living organism with ease. The Cas9 enzyme can be tailored to target and cut out specific genes or insert new ones. It’s already being used to treat cancer and viral infections, and researchers hope that it will one day cure a host of genetic ailments.

But while CRISPR works very well, the mechanism by which Cas9 determines which genes to cut and which to leave alone is not entirely understood.

Ohio State doctoral student Austin Raper, lead author of the first JACS paper, explained that CRISPR rarely targets unintended genes. But such errors can have very serious consequences when they do happen. For instance, if Cas9 were to accidentally target and cut a tumor suppressor gene from someone’s DNA, that person would be much more likely to develop cancer.

“If CRISPR is to advance to its full potential, it is paramount that scientists fully understand how Cas9 functions and determine why it sometimes makes these errors,” Raper said. “Our new result is exciting because now we understand how Cas9 decides to cleave DNA, which is fundamental in the quest to prohibit unintended, off-target DNA cutting.”

Raper and his co-authors determined that two different parts of the large and labyrinthine Cas9 molecule communicate with each other to set the location and timing of a cut. As the first part of the molecule moves to cut its respective strand of DNA, it subtly changes shape and nudges the second part, triggering it to cut the second strand.

The first cut happens quickly. The second cut happens much more slowly, and wouldn’t happen at all without the trigger, the researchers concluded. Now the same group is studying how non-target genes may affect the timing and location of cuts.

The second JACS paper concerns some unusual behavior of the Cas9 enzyme that nobody had noticed before.

Doctoral student Anthony Stephenson and his co-authors examined what Cas9 does after it cuts DNA. Previously, researchers believed that the enzyme would grab onto DNA, make one clean cut and then let go. But the Ohio State researchers found that the enzyme stays attached to the DNA long enough to take a second snip out of just one half of the DNA strand, leaving edges of different lengths.

Why? Cas9 carries a strong positive charge and DNA carries a strong negative charge, Stephenson explained, so the two form a very strong bond. Meanwhile, the guide RNA molecule that directs Cas9 to a particular DNA sequence becomes strongly paired with one side of the DNA strand.

“In other words, it is not easy for Cas9 to untangle itself from the DNA. So while Cas9 remains stuck to the DNA following the initial double-stranded DNA cut, it continues to trim small pieces of DNA off the loose DNA strand,” Stephenson said.

The team will now explore ways of preventing or even enhancing this behavior to benefit the field of gene-editing, perhaps allowing for more efficient gene insertion. The staggered edges make the DNA sticky, allowing for multiple pieces of DNA to be attached together in a specific order and orientation, Stephenson added.

Funding for the work came from a Pelotonia Idea Research Program Award from The Ohio State University Comprehensive Cancer Center.