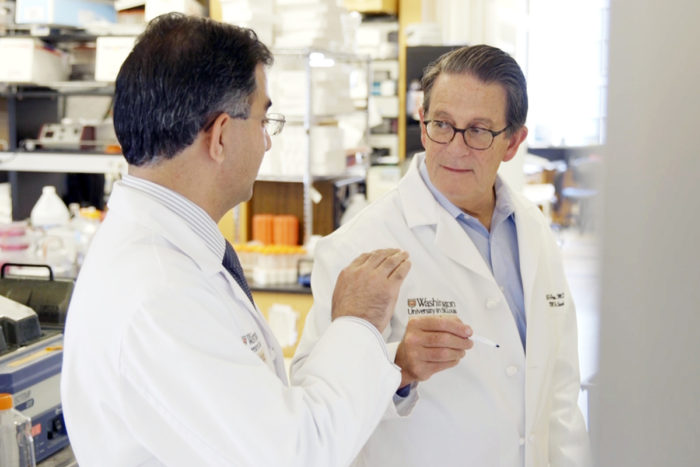 Last year, the Food and Drug Administration approved the first cellular immunotherapies to treat cancer. These therapies involve collecting a patient’s own immune cells — called T cells — and supercharging them to home in on and attack specific blood cancers, such as hard-to-treat acute lymphoblastic leukemia and non-Hodgkin lymphoma.

But so far, these T cell immunotherapies — called CAR-T cells — can’t be used if the T cells themselves are cancerous. Even though supercharged T cells can kill cancerous T cells, they also can kill each other because they resemble one another so closely.

The study evaluating the approach in mice appears online in the journal Leukemia.

DiPersio’s team first generated a novel CAR-T strategy targeting CD7, allowing for the targeting and killing of all cells with CD7 on the surface.

“But if we program T cells to target CD7, they would attack the cancerous cells and each other, thus undermining this approach,” DiPersio said. “To prevent this T cell fratricide, we used CRISPR/Cas9 gene editing to remove CD7 from healthy T cells, so they no longer carry the target.”

To do this, they genetically deleted the T cell receptor alpha (TCRa) subunit. This way, T cells from any normal donor can be used without risk of life-threatening toxicities such as graft-versus-host disease, in which T cells attack the organs of the recipient, sometimes resulting in death. This new approach also may have broad implications for the CAR-T field, allowing for use of therapeutic T cells from any healthy donor. Healthy T cells could be collected in advance and stored for any patient with a relapsed T cell malignancy.

“We have genetically modified these T cells so they are unable to cause graft-versus-host disease but can still kill cancerous cells,” said first author Matthew L. Cooper, PhD, an instructor in medicine. “One additional benefit of this approach is that a patient could receive this therapy much more quickly after diagnosis. We wouldn’t need to harvest the patient’s own T cells and then modify them, which takes time. We also wouldn’t have to find a matched donor. We could collect T cells from any healthy donor and have the gene-edited T cells ready in advance, a strategy termed ‘off-the-shelf’ CAR-T cell therapy.”

The researchers demonstrated that this approach is effective in mice with T cell acute lymphoblastic leukemia (T-ALL) taken from patients. Mice treated with the gene-edited T cells targeted to CD7 survived 65 days, compared with 31 days in a comparison group that received engineered T cells targeting a different protein. The researchers also found no evidence of graft-versus host disease in mice that received T cells lacking the molecular machinery that sees healthy tissues as foreign. They also found that the therapeutic T cells remained in the blood for at least six weeks after the initial injection, suggesting it could ramp up again to kill cancerous T cells if they return.

“T cell malignancies represent a class of devastating blood cancers with high rates of relapse and death in children and adults with the disease,” Cooper said. “In an effort to develop the first clinically viable targeted therapy for this type of cancer, we are scaling up the manufacturing of our gene-edited CAR-T cells for clinical trials, which we hope to complete at Siteman Cancer Center.”