Wheat is the second most important food crop in the developing world. It’s not just in pasta, either. Wheat is found in more food than you can imagine (1). Like corn and soy, we need it, and lots of it.

But, contrary to what you may think, GMO wheat is not sold or used. In fact, although seed companies have produced it, GMO wheat is not grown commercially for a myriad of different reasons, most of which are for another story on another day.

One challenge to improving wheat genetically has been due to the complex genetic mechanisms that go on with wheat DNA. A wheat cell has six copies of its seven chromosomes (42 chromosomes total). See the depiction below.

Not only in the amount of DNA daunting, but the multiple copies of one gene make genetic manipulation very tricky. If one gene is mutated, for example, to improve a trait in the wheat, any of the other copies of that gene can undo the mutation through the process of recombination (swapping DNA from one chromosome to another.)

CRISPR-Cas9, the DNA editing technology that is changing the face of genetic engineering, can alleviate this issue. How? Because it has what is called multiplex genome editing capacity. This means that many genes can be altered simultaneously and beneficial modifications in multiple genes can be made at the same time.

In a new study, mutations in all three copies of the gene TaGW2, resulted in an increase in thousand grain weight, grain area, grain width, and grain length. This can be seen in the figure below. The blue boxes represent the mutant wheat and the yellow boxes represent the non-mutated wheat. In all four categories of measurement, the mutant wheat are superior. The plots show (A) grain area, (B) grain width, (C) grain length, and (D) thousand grain weight (TGW) of gw2 knockout (aabbdd) and wild-type plants (AABBDD). 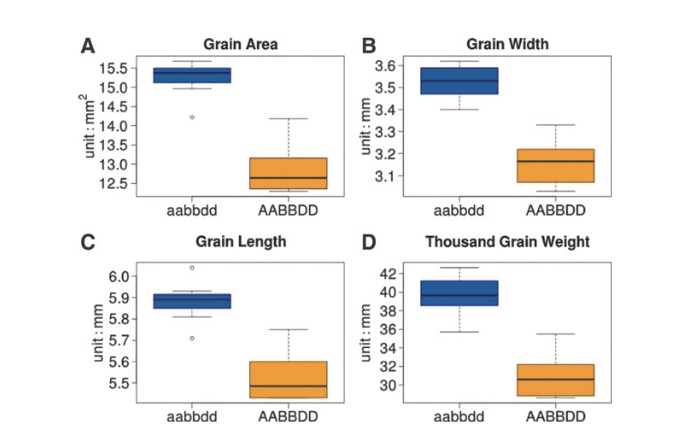 The group went on to show that these mutations are heritable and were edited by CRISPR- Cas9 in the future generations of wheat by crossing the wheat plants with the gene targeting materials with wheat lines expressing the CRISPR-Cas9 materials.

This is an exciting demonstration of gene editing activity in wheat that is passed down from one generation to the next and may provide a useful tool for improving wheat in the future.

This paper is published in the first volume, first issue of the brand new The CRISPR Journal.

(1) Some unexpected places to find wheat are: