Protein products of an expanded repeat sequence in the C9ORF72 gene harm neurons in myriad ways, ultimately leading to amyotrophic lateral sclerosis (ALS) and/or frontotemporal dementia (FTD). In a March 5 study in Nature Genetics, researchers led by Aaron Gitler and Michael Bassik at Stanford University deployed CRISPR gene editing to screen for modifiers of this toxicity in human cells and in mouse neurons. They pulled out hundreds of genes that either helped or hindered C9’s damage from multiple pathways, including nucleocytoplasmic transport, RNA processing, and endoplasmic reticulum (ER) stress. Knocking out one of the most potent modifiers—a gene called TMX2—dampened harmful cell stress signals and boosted survival of neurons from patients with C9-ALS. 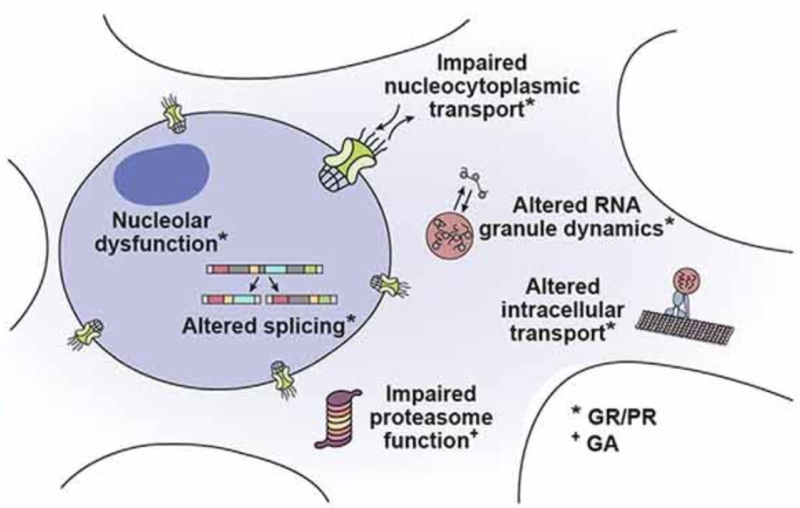 Fresh targets for C9orf72 ALS? A new CRISPR modifier screen suggests that DPRs may contribute to motor neuron toxicity in part by increasing ER stress and by disrupting nucleocytoplasmic transport. [Courtesy of Freibaum and Taylor, 2017 under CC BY 4.0 license.]

“[The study] truly shows that CRISPR/Cas9 is not only a tool for therapeutic genome editing but, compared to other genome-editing approaches, has the unique capacity for genome-wide screens and biological discovery,” commented David Schaffer of University of California, Berkeley.

Robert Baloh of Cedars Sinai Medical Center in Los Angeles commended the authors, saying that the powerful screens identified unanticipated modifiers of C9ORF72 toxicity. “The beauty of their approach is that it immediately provides a target for drug screening, and a therapeutic avenue toward the clinic,” he added.

Aggregates of dipeptide repeats (DPRs) translated from C9ORF72 repeat expansions are known to disrupt multiple cellular functions. Five types of DPR are known, of which two arginine-containing varieties—glycine-arginine (GR) and proline-arginine (PR)—are the most toxic (for review, see Freibaum and Taylor, 2017; see also Oct 2017 news). Researchers know that the peptides link up with proteins that contain low-complexity domains, including RNA-binding proteins, parts of the ribosome and other translation factors, and the nuclear pore complex. In this way, the DPRs derail multiple cellular processes (see Aug 2014 news; Dec 2014 news; Aug 2015 news; Oct 2016 news). The DPRs’ promiscuity offers rich opportunities to try to stem the damage they cause. To date, researchers have performed genome-wide screens for modifiers of DPR toxicity in model organisms, including yeast and flies, but screens in mammalian systems have awaited technical advances in gene editing (Jovičić et al., 2015; Boeynaems et al., 2016).

Enter CRISPR. Co-first authors Nicholas Kramer and Michael Haney used the gene-editing tool to perform the first-ever screen for genetic modifiers of DPR toxicity in mammalian cells. They used a human myelogenous leukemia cell line, K562, because the cells grow rapidly and have proven their worth in other genome-wide screens. The cells stably express the Cas9 nuclease, which targets single-guide RNAs (sgRNAs) designed to adhere to target genes. For the DPR screen, the researchers transduced the cells with a library of 10 sgRNAs per each of 20,500 genes, as well as 10,000 negative control sgRNAs. They then treated the cells with synthetic polymers of PR20 or GR20 at doses known to kill half of the cells, and later performed deep sequencing on the remaining cells to determine which CRISPR knockout clones were enriched (i.e., protected) versus depleted (i.e., sensitized) to the DPR assault.

The scientists identified 215 and 387 genetic modifiers of PR20 and GR20 toxicity, respectively, many of which overlapped. Among the top hits were some of the same nuclear transport genes identified in yeast and fly screens, suggesting common mechanisms of toxicity across organisms. There were also brand-new modifiers, including genes encoding RNA-binding proteins, splicing machinery, chromatin modifiers, and transcriptional regulators. Interestingly, many genes encoding proteins that reside in the ER popped up, including those involved with the ER-associated degradation pathway that switches on in response to cell stress.

Would these genes also modify C9ORF72 toxicity in neurons? To find out, the researchers ran toxicity screens in mouse primary cortical neurons derived from animals expressing Cas9. This time, they delivered the toxic DPRs via two different routes: either by adding synthetic PR20 to the culture media, as they had done in the human screen, or by using a lentivirus to express PR50 within the cells. That way they could distinguish between genes that played a role in uptake and intracellular transport of the peptides, and those that mediated toxic effects after cellular entry. They transduced the cells with a library of sgRNAs designed to target the top 200 hits from the human genome-wide screen. 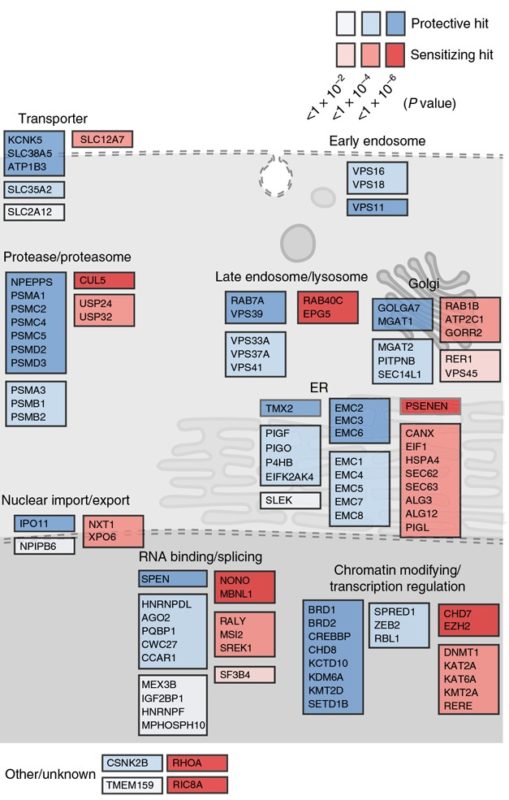 They identified 13 modifiers from the synthetic PR20 screen, and 17 from the viral-expression screen. Only five overlapped, meaning that toxicity modifiers varied significantly depending on the mode of DPR delivery. The researchers reasoned that modifiers identified only in the synthetic PR20 screen might be relevant if DPRs spread from cell to cell within the brain. The endolysosomal trafficking gene, RAB7A, emerged as a top hit from that screen. Investigating this further, the researchers confirmed that knocking out RAB7A in HeLa cells prevented synthetic PR20 polymers from reaching the nucleus, where they are known to do damage. Instead, the externally administered dipeptides remained trapped in early endosomal compartments.

The top hits in the lentiviral PR50 screen were primarily nuclear and ER-resident proteins. TMX2 was a top modifier, as neurons lacking the gene had a clear survival advantage. This gene also modified toxicity in the human screen. Little is known about the gene, except that it encodes an ER transmembrane thioredoxin protein with uncertain activity. Other members of the TMX family have been implicated in modulating the ER stress response (Matsuo et al., 2009).

Taking a step back, the researchers first assessed whether this stress response in fact switched on when PR50 was expressed in neurons. Indeed, a transcriptional analysis revealed an induction of multiple stress-associated genes in response to PR50 expression, including genes involved in DNA repair, translation, and apoptosis. The same was true in human K562 cells treated with synthetic PR20. The findings pointed to the integrated stress response (ISR), which converges on the phosphorylation of eIF2a and the global inhibition of translation. Indeed, pretreating the K562 cells with ISRIB, an inhibitor of eIF2a phosphorylation, substantially reduced the toxicity inflicted by PR20.

Reasoning that TMX2 could play a role in evoking this harmful stress response, the researchers next sequenced the RNA of the mouse neurons expressing sgRNAs targeting TMX2. Compared with neurons expressing control sgRNAs, the TMX2-knockout neurons responded to PR50 expression by ramping up pro-survival genes and turning down apoptotic ones. In particular, the cells switched on genes involved in the unfolded protein response, a wing of the ER stress response that tends to promote survival. Atf3, a gene already deemed protective in other mouse models of ALS, was among those induced by DPRs in the neurons lacking TMX2 (see Seijffers et al., 2014). Strikingly, the researchers found that overexpressing Atf3 in mouse neurons protected them from DPR toxicity. Haney told Alzforum that overall, the findings suggest that TMX2 somehow hinders protective responses to DPRs, and promotes destructive ones. However, the details of the relationship between TMX2 and Atf3 remain to be elucidated.

“The data in iPSC-derived motor neurons, while modest in effect, is really a key finding in this the paper,” commented Peter Todd of the University of Michigan in Ann Arbor. “It is the only part of the manuscript done at endogenous levels in the setting of the GGGGCC repeat and further supports the argument that DPRs, and PR and GR in particular, are drivers of toxicity in the disorder,” he added.

The researchers interpreted their findings to indicate that TMX2 skews the response to ER stress toward cell death, while removing TMX2 steers the cell toward life-saving maneuvers. They aim to investigate the physiological role of this gene further, perhaps in mouse models of C9ORF72 toxicity, Kramer said. 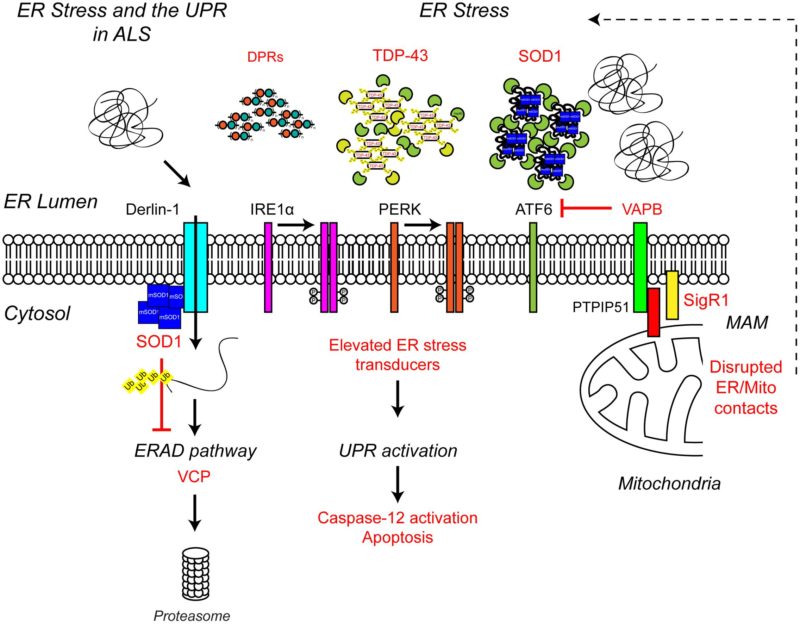 Added ER stress? DPRs may stoke the fire of cellular stress according to a growing number of studies (see Jan 2018 news).[Courtesy of Webster et al., 2015 under a CC BY 4.0 license.]

Todd commented that the paper adds to growing evidence that DPRs stoke the fire of cellular stress. Two recent papers—one from Todd’s group and the other led by Shuying Sun of Johns Hopkins University in Baltimore—reported that the integrated stress response promoted translation of DPRs while suppressing global translation (see Jan 2018 news). This is because the DPRs are translated via a noncanonical mechanism called repeat-associated non-AUG (RAN) translation. Sun noted that although the DPRs in Gitler’s screen were not expressed via RAN, together they pointed to the existence of a toxic feed-forward loop, in which cellular stress in response to DPRs also fuels their enhanced production. However, Sun cautioned that because RAN translation was not addressed in the screen, it is possible that targeting some modifiers, such as TMX2, might elevate such translation in its physiological context.

Todd added that while these details need to be ironed out, the paper supports the idea that targeting the ER stress pathway is a path forward (see May 2017 news). “Whether a more targeted approach, such as targeting TMX2, or a factor specifically required for RAN translation, or a broad approach such as application of ISRIB to block the whole pathway is more sensible will be a point of discussion in the field going forward,” he wrote.

What about other hits? Kramer and Haney told Alzforum that they hope the screen results will serve as a continuing resource for the ALS community, and that researchers will investigate modifiers that interest them.

Ludo Van Den Bosch of KU Leuven in Belgium agreed. “It is very clear that the information obtained from these genome-wide screens will be an important source of modifiers that can be tested for their effect in other systems, and that could lead to the development of new therapeutic strategies,” he wrote.

To view commentaries, primary articles and linked stories, go to the original posting on Alzforum.org here.