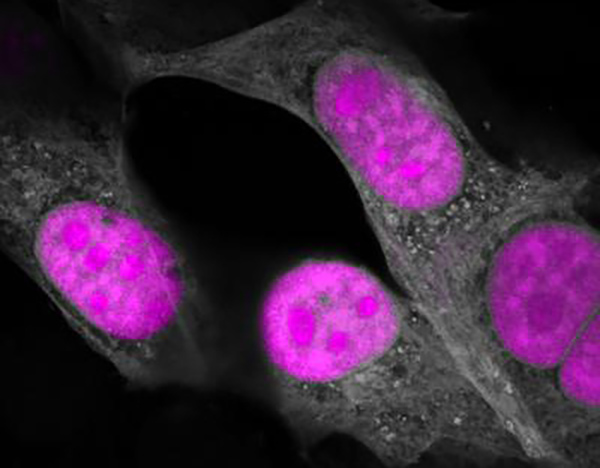 Salk Institute scientists have developed a newly identified RNA-targeting CRISPR/Cas system into a compact, easily delivered CRISPR-based tool for RNA knockdown in human cells. The team, led by Patrick Hsu, M.D., a Helmsley-Salk Fellow and senior author of the team’s published paper in Cell, describe use of the system, which they’ve dubbed CasRx, to correct protein imbalance in cells from a patient with frontotemporal dementia (FTD). “Our results present CasRx as a programmable RNA-binding module for efficient targeting of cellular RNA, enabling a general platform for transcriptome engineering and future therapeutic development,” the authors write. Their paper is entitled “Transcriptome Engineering with RNA-Targeting Type VI-D CRISPR Effectors.”

CRISPRs (clustered regularly interspersed short palindromic repeats) are a form of bacterial defense mechanism, or immune system, which includes natural molecular scissors—including the Cas9 enzyme —which scientists have harnessed as highly specific, gene-editing tools. While DNA-targeting CRISPR-derived tools such as CRISPR/Cas9 have revolutionized genome engineering and allowed scientists to investigate gene function or correct disease-causing mutations, simple, scalable tools for studying and correcting RNA “lag significantly behind their DNA counterparts,” the Salk researchers point out. “Existing RNA interference technologies, which enable cleavage or inhibition of desired transcripts, have significant off-target effects and remain challenging engineering targets due to their key role in endogenous processes. As a result, methods for studying the functional role of RNAs directly have remained limited.” And while previously characterized CRISPR/Cas systems can be reprogrammed to recognize RNAs, their large size makes it difficult to package them into an adeno-associated virus (AAV) vector for delivery into cells, the authors explain.

“We began the project with the hypothesis that different CRISPR systems may have been specialized throughout an evolutionary arms race between bacteria and their viruses, potentially giving them the ability to target viral RNA,” explains Salk research associate Silvana Konermann, Ph.D., a Howard Hughes Medical Institute Hannah Gray Fellow and first author of the Cell paper.

Their analysis identified a previously uncharacterized family of RNA-guided, RNA-targeting CRISPR enzymes, which the team called Cas13d, and which were present in different bacterial species. They identified the optimum variant for use in human cells, which they found in the gut bacterium Ruminococcus flavefaciens XPD3002, and adapted into the RNA-targeting CasRx system. Importantly, CasRx is small enough to be packaged into an AAV vector, and readily delivered into human cells. “CasRx is a minimal two-component platform, consisting of an engineered CRISPR/Cas13d effector and an associated guide RNA, and can be fully genetically encoded,” they explain. “At an average size of 930 aa [amino acids], Cas13d is to our knowledge the smallest class 2 CRISPR effector characterized in mammalian cells. This allows CasRx effector domain fusions to be paired with a CRISPR array encoding multiple guide RNAs while remaining under the packaging size limit of the versatile AAV delivery vehicle for primary cell and in vivo delivery.”