A new CRISPR tool proves that good things do sometimes come in small packages. Patrick Hsu and colleagues at the Salk Institute in La Jolla, California, identified a family of bacterial RNA-guided, RNA-selective nucleases. Considerably smaller than known Cas nucleases, they efficiently and specifically knocked down mRNAs in human cells. In a first, Hsu and colleagues used the ribonucleases to manipulate mRNA splicing, too. The scientists reversed aberrant tau mRNA splicing in neurons derived from a patient with frontotemporal dementia (FTD), foreshadowing future therapeutic possibilities. 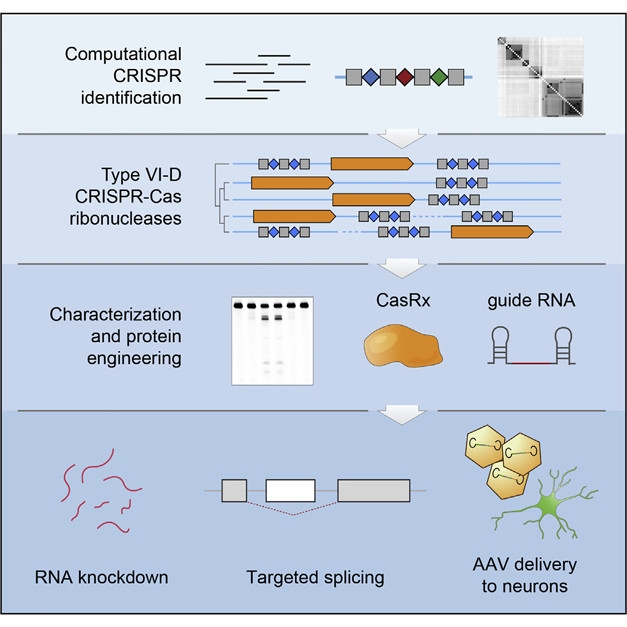 Nice Catch. A computational approach uncovered the type VI-D family of bacterial CRISPR-Cas NA nucleases, which were then engineered for expression in mammalian cells. CasRx and its guide RNA targeted specific transcripts for knockdown and tweaked splicing in human neurons. [Courtesy of Cell, Konermann et al., 2018.]

As an extra bonus, the petite ribonucleases are easier to package into viral vectors and introduce into mammalian cells. Hsu’s work appeared in Cell on March 15. A second group, led by David Cheng and David Scott from Arbor Biotechnologies in Cambridge, Massachusetts, independently discovered the same enzyme family, and published their work the same day in Molecular Cell.

While much attention has focused on using CRISPR-Cas editing of DNA to treat disease, Hsu sees advantages to targeting RNA. DNA editing permanently alters the genome, and introduces the risk of DNA damage. Changes to DNA tend to be all or nothing; that is good for ablating or replacing a gene wholesale, but not for fine-tuning protein or isoform expression, he told Alzforum. In contrast, targeting dynamic changes in RNA allows for reversible tweaking of both. In addition, an estimated 15 percent of genetic diseases stem from RNA mis-splicing, and would be more amenable to RNA- than DNA-targeted editing approaches.

DNA editing technology has rapidly advanced (see Dec 2017 news), but the development of tools to precisely edit RNA has lagged. Only in 2016 did researchers discover bacterial CRISPR-Cas13 nucleases that digest RNA. Last year they reported engineering them to knock down, or make single base changes in, mRNAs in mammalian cells (see Oct 2017 news; Abudayyeh et al., 2016; Abudayyeh et al., 2017). 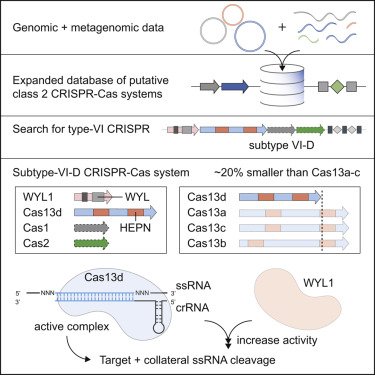 To expand the toolbox, both groups of investigators took the same approach. They scanned prokaryotic sequence databases to uncover novel nucleases related to the previously identified Cas13a and Cas13b enzymes. The new family, which they call Cas13d, comprises the smallest CRISPR effectors described to date. They weigh in at 930 amino acids, compared with 1,120–1,250 for other Cas13s. Both groups extensively characterized the nuclease activity and guide requirements in bacteria, and the Arbor group also identified an accessory protein that boosted Cas13d activity.

Despite their small size, Cas13ds more than matched their cousins in terms of targeted RNA cleavage in human cells. First author Silvana Konermann from Hsu’s group tested seven Cas13d orthologs. They found the best of the lot, from Ruminococcus flavefaciens (CasRx), consistently knocked down levels of 11 different targeted human RNAs by at least 80 percent, with a median of 96 percent reduction. In a head-to-head comparison, synthetic antisense oligonucleotides (ASOs) only reduced expression by 65 percent on average. In Hsu’s hands, CasRx compared favorably with CRISPR-Cas13a and 13b, which decreased target mRNA levels by 80 and 66 percent, respectively. Analysis of whole-cell transcriptomes revealed little off-target mRNA suppression by CasRx, in contrast to ASOs.

To modulate splicing, Hsu’s group generated a nuclease-dead mutant (dCasRx) that still bound to RNA, but didn’t cleave it. They suspected that the physical presence of dCasRx on the mRNA would block splicing factors from accessing and processing the message, and that seemed to be the case. When they targeted dCasRx to a splice acceptor site, donor site, or exon in a reporter construct, they did not change overall translation, but did increase exon skipping, with acceptor site targeting being most efficient. “The results suggest that dCasRx may allow investigators to tune isoform expression through use of varying guides,” said Hsu.

Aberrant splicing is implicated in some genetic forms of FTD, where mutations in the MAPT gene for tau elevate levels of a four-repeat (4R) splice isoform relative to the smaller, three-repeat (3R) form. Hsu wondered if dCasRx might normalize tau splicing. He tested this in neurons derived from a patient with a MAPT mutation commonly found in FTD—a C to T change in intron 10 that alters splicing in favor of the 4R form. Before treatment, the neurons had a 4R/3R ratio about three times that of normal control neurons. After adenovirus expression of dCasRx and splice-site targeting guide RNAs, the ratio dropped by about half, bringing it closer to that in control cells.

This is just the beginning for RNA editing, said Hsu. “Splicing and knockdowns are just two of the many things we should be able to do with this platform. When we started with Cas9 DNA editing, the first thing we did was gene knockdown and knock-in. Now we have an entire toolbox for transcriptional control and genome editing in cells. We hope this will be the same for transcriptomics, where you can target any post-transcriptional process, like RNA methylation or editing or translational control, and use these tools to delve deeper in to RNA biology.”

Hsu said he is excited to get CasRx into the hands of more researchers, telling Alzforum the plasmids will be distributed on Addgene. The Arbor Biotechnologies group also said they plan to make their reagents available this way.

To view commentaries, primary articles and linked stories, go to the original posting on Alzforum.org here.