a common DNA genetic coding of a single base change can lead to or exacerbate many life-threatening diseases. Such“point mutations”can be the human body within the cells into cancer cells, then this cancer cells continue to grow and form tumors, or they can be the antibiotic sensitivity of bacterial transformation to result in incurable infections of antibiotic-resistant bacteria. In an ideal world, the Clinician should be able to carry such a harmful point mutations of the cells immediately after they are cleared, thereby more effectively resist disease. 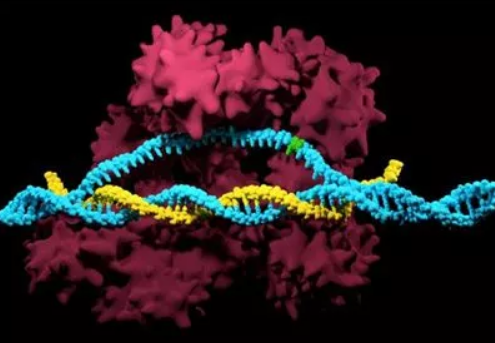 now, in a new study, from the Harvard Medical School wise bio-inspired Engineering Research Institute Wyss Institute for Biologically Inspired Engineering researchers reported by the CRISPR/Cas9 genome engineering system into a genome of a monitoring tool, they have to complete to achieve this goal the first step. In the wise bio-inspired Engineering Research Institute core members George Church and James Collins under the leadership, these researchers developed an in vivo mutation prevention method, this method can allow the cutting of DNA by the Cas9 enzyme to distinguish the difference of a single nucleotide of the genomic target site, and only cutting the unwanted target sites. For in vitro culture or in the mouse gastrointestinal tract within the plant of the E. coli strain to carry out proof-of-concept study, this method can prevent antibiotic-resistant bacterial variants survive. Related research results recently published in the PNAS journal, The paper entitled“Precise Cas9 targeting enables genomic mutation prevention”。

The Guide RNA（the gRNA by complementary base pairing the Cas9 enzyme is guided to its genomic target sequence. Once it reaches the interest of the site, Cas9 is like a molecular pair of scissors, at a specified point on the cutting of the target sequence. If to be repaired, then this deliberate introduction of DNA damage to allow biologists to edit the cell’s genome, but if not repaired, it will lead to cell death. However, given the CRISPR/Cas9 system in many organisms the genome is the finding and cutting of the target sequence efficiency, let Cas9 in the secondary sites rather than at exactly the same loci on the random cut of the nonspecific still to genome engineers to bring problem. This also means that Cas9 is usually not able to fully differentiate to carry an unwanted point mutation of the target sequence and their normal target sequence, it will not be able to selectively be removed. Even the design of the specific better customize the Cas9 enzyme to date also can not completely solve this problem.

Church said,“by focusing on the gRNA of features, our method Cas9 specificity significantly improved to be able to clearly distinguish the single nucleotide polymorphism and be able to remove unwanted gene variant level. Our methods for the future prevention of the disease has opened up a whole new way.”

previous studies have shown that the gRNA with its target sequence between the presence of a certain mismatch does not affect the Cas9 cutting DNA in specific sites of the ability. Papers Co-first author Alejandro Chavez Dr. said,“We guess for a given the difference of only one nucleotide of the target site, in the gRNA identified a set of mismatch will eliminate the Cas9 to the normal of the target sequence of the cleavage activity, but will maintain on carrying deleterious point mutations in the target sequence of strong activity. This will in carrying the point mutation of cells generated after the stop it from functioning.”

In order to develop this method, these researchers use a bacteria enzyme known to cause their antibiotic resistance the point mutations. By focusing on one of several point mutations and screening with different mismatch combinations of gRNA variants, they can be identified to promote Cas9 specificity for targeted mutation of the gene sequence, but not targeting the normal gene sequence of the gRNA. p>

the papers Co-first author Benjamin Pruitt said,“this mutation prevention systems not only under standard laboratory conditions of incubation of the E. coli strains maintained in antibiotic sensitivity, and for colonization in germ-free mice the gastrointestinal tract of the bacteria also maintained���Vitamin sensitivity. These continuous multi-day experiments with mice relates to continuously let these mice were administered a dose of antibiotics, and confirmed that even after suffering a potential significant environmental pressure, this system is still very effective.”

the researchers believe that their mutation prevention system in addition to the potential for future disease prevention, but also may immediately assist the biotechnology industry to prevent large-scale cultivation of the bacteria occurs that causes them not productive or susceptible to contamination of the mutation, and to study microbial evolution.”