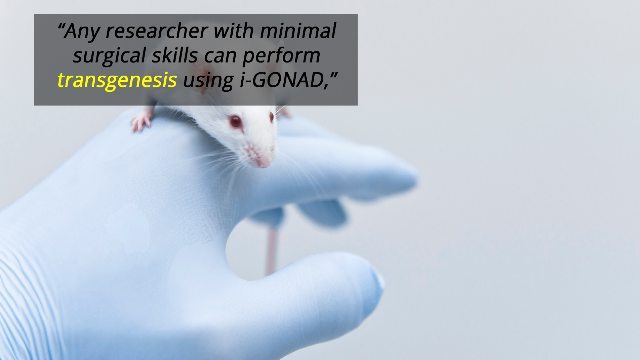 One of the most well-utilized tools in modern genetic research is the modification of an animal genome to enable diseases that affect humans to be studied without the need to test with human volunteers. This field of transgenics has greatly advanced biological research since the first genetically modified animal was created over 40 years ago.

But no tool is perfect, and the limitations of transgenics are well-documented. In addition to their high cost and self-limiting complexity, these experiments require large numbers of animals to achieve their desired goal. Now, a new technique, called i-GONAD, which leverages state-of-the-art gene editing technology, may make transgenics simpler, cheaper and far more efficient, changing how genetic engineering techniques are practiced.

i-GONAD’s creator, Masato Ohtsuka, Associate Professor at Tokai University, Japan says that the field of transgenics has been using largely the same complex tools since it began. “The traditional protocols for modifying genes to create knock-in and knock-out mice [mice with, respectively, added genes from external sources, or suppressed versions of their own genes] have been in place since the 1980s – and a Nobel prize was awarded for these technologies in 2007! These protocols include four major steps: one, modifying genes in embryonic stem (ES) cells by using a custom-designed recombinant DNA; two, collecting hundreds of embryos from many pregnant animals; three, injecting the modified ES cells into hundreds of embryos, and; four, surgically transferring the injected embryos into another set of females, to host the embryos until they grow to newborn pups.”

Even just from this simplified explanation, it’s clear that the current techniques come with a huge cost, both financially and ethically, with one transgenic modification potentially requiring a huge number of animal embryo sacrifices.

i-GONAD bypasses virtually all these four steps. The technique edits the genes of zygotes directly by delivering the necessary editing tools into the oviduct of pregnant female mice. This means there is no need to microinject stem cells, and far fewer mice need to be used in a run of an experiment. Another potential benefit of i-GONAD is that it can allow test mother mice to be re-used, with different mutations applied to different batches of offspring. These key innovations could drastically reduce the number of animals that need to be used in transgenic experiments.

The technique uses “Easi-CRISPR” technology, another invention of Dr. Ohtsuka. CRISPR, the widely used gene editing technique, can alter target genes at a location of the user’s choice. Previous attempts to utilize CRISPR in transgenic experiments have run into problems, says Dr. Channabasavaiah Gurumurthy, Associate Professor at the University of Nebraska and the co-inventor of Easi-CRISPR. “The previously tried CRISPR methods, which used double-stranded DNA donor cassettes, did not achieve the required level of cassette insertion – they are successful only ~1% to 10% of the time. The single-stranded DNA donor format in Easi-CRISPR overcomes this hurdle and achieves insertion efficiency as high as 100% in some cases.”

The practical outcome of this is a technique which is far easier and far cheaper than conventional transgenics techniques. Currently, most of these experiments are conducted in specialized “core” facilities as a fee-for-service to develop models for research labs. i-GONAD can be done without the expensive microinjection tools these facilities house, “Any researcher with minimal surgical skills can perform transgenesis using i-GONAD,” says Ohtsuka.

The technique still requires some improvements – mosaicism, an outcome where test animals have many different types of edits of target gene, and a result do not have the desired mutant traits, still occurs in up to 30% of genes edited by i-GONAD. But if more effort is put into developing innovative technologies like i-GONAD and Easi-CRISPR, then scientists can look to a future that has cheap, efficient ways of producing genetically engineered models for important research whilst using fewer animals.