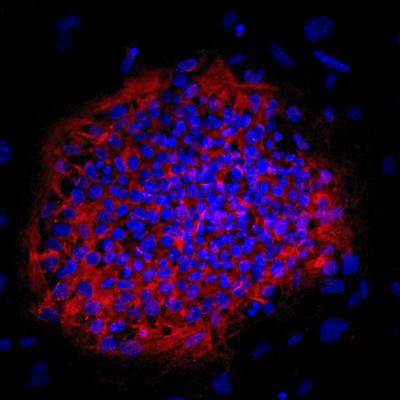 Scientists at the Hebrew University of Jerusalem have generated an atlas of genes—the essentialome —that are essential for the normal growth and maintenance of human pluripotentent stem cells (hPSCs). The team, led by Nissim Benvenisty, M.D., Ph.D., director of the Azrieli Center for Stem Cells and Genetic Research and the Herbert Cohn Chair in Cancer Research, carried out a genome-wide CRISPR-Cas9 loss-of-function screen on haploid human embryonic stem cell (hESCs) to highlight which of more than 18,000 genes are necessary for growth and survival of the pluripotent cells and which genes restrict cell growth.

“Our screen revealed the essentialome of hPSC-specific genes, and highlighted the main pathways that regulate the growth of these cells,” the researchers write in their published paper in Nature Cell Biology. The findings also uncovered opposing roles for tumor suppressor and oncogenes, evaluated the role of genes for hereditary disorders in early human development and growth, and demonstrated how cancer-causing genes could affect growth of the human embryo.

“This study creates a new framework for the understanding of what it means to be an embryonic stem cell at the genetic level,” comments co-lead author Atilgan Yilmaz, Ph.D. “The more complete a picture we have of the nature of these cells, the better chances we have for successful therapies in the clinic.” The researchers report their findings in a paper entitled “Defining Essential Genes for Human Pluripotent Stem Cells by CRISPR–Cas9 Screening in Haploid Cells.”

The Hebrew University scientists recently identified a type of haploid hESC that retains human pluripotent stem cell features, gene expression signatures, and epigenetic profiles; can differentiate into haploid somatic cells both in vitro and in vivo; and can be grown and retain a normal haploid karyotype in culture. These features make the cells “an efficient screening platform to address questions regarding pluripotency on a genome-wide level,” the researchers write.

They carried out a CRISPR-Cas9-based genome-wide loss-of-function screen on the haploid cells, using a library of single guide RNAs (sgRNAs) targeting more than 180,000 mutations on some 18,000 coding genes. The aim was  “to identify mutations in essential genes that affect the survival or normal growth of hESCs based on their depletion in the hESC population, as well as mutations in growth-restricting genes that provide a growth advantage to hESCs.”

Results from the screen suggested that while 9% of all the genes are essential to the growth and survival of these human pluripotent stem cells (hPSCs), 5% act to limit cell growth. Loss of function of these genes gives the hPSCs a growth advantage. “We found that 66% of the cell-essential genes encode proteins that localize to the nucleus, 12% encode mitochondrial proteins and 8.5% encode cytosolic proteins, while the rest encode proteins that are distributed between the endoplasmic reticulum, plasma membrane, extracellular space, cytoskeleton and the Golgi,” the researchers write.

Many of the essential genes identified are also mutated in human autosomal recessive (AR) genetic disorders. “Of 2,099 human AR-related genes reported in the Online Mendelian Inheritance in Man (OMIM) database that were also represented in our library, 226 (10.8%) were found to be essential for hESC growth,” the authors note. Genes responsible for AR disorders that have a growth-retardation phenotype were highly represented in the set of essential genes. “Our analysis suggests that the phenotype of growth retardation associated with AR disorders may initiate, in one-fifth of the disorders, at very early stages of embryogenesis,” the researchers continue. These findings open up an exciting future direction toward modeling the growth-retardation phenotype already in hPSCs for a wide group of AR disorders.

Nearly all of the oncogenes whose mutations affect the growth of hESCs were also classified as essential for normal growth, except for one, JUN, which was growth restricting. In contrast, tumor suppressors were classified into both essential and growth-restricting camps, with analyses indicating an enrichment for apoptosis-related genes among the growth-restricting tumor suppressors, whereas essential tumor suppressor genes were more likely to be involved in processes such as genomic instability and DNA repair. “This analysis thus points to distinct roles for tumor suppressor genes in hPSCs,” the researchers state. In particular, a role for the p53-mTOR (mechanistic target of rapamycin) pathway was identified in hESC growth regulation. “Our screen also led to the identification of growth-restricting genes whose loss of function provides a growth advantage to hPSCs, highlighting the role of the P53–mTOR pathway in this context.”

Further analyses of the screening results also uncovered a set of genes that are essential for the survival of hPSCs, but not other cell types, and are thought to play a role in maintaining ESC identity, holding back cell differentiation and preventing stem cells from becoming cancerous. “hPSC-enriched essential genes mainly encode transcription factors [TFs] and proteins related to cell-cycle and DNA-repair, revealing that a quarter of the nuclear factors are essential for normal growth,” they write. “Our characterization of the hESC essentialome extends the definition of pluripotency beyond the TF-centric view and suggests that genes regulating cell-cycle and DNA repair, which are enriched in hESCs, are also essential for their normal growth and play a vital role in pluripotent cell identity.”

The team suggests its findings could lay the groundwork for future studies investigating human pluripotency essential genes, hPSC growth regulation, and disease modeling using hPSCs. “This gene atlas enables a new functional view on how we study the human genome and provides a tool that will change the fashion by which we analyze and treat cancer and genetic disorders,”Dr. Benvenisty concludes.