Source: Chen Kuang when the research group based on the CRISPR single-molecule imaging of DNA technology has made new progress

Original title: Chen Kuang when the research group based on the CRISPR single-molecule imaging of DNA technology has made new progress

The CRISPR gene editing technique is a method capable of efficiently and stably the gene knockout method. The art is by the Cas9 protein and the single-guideRNA (sgRNA). Cas9 is a DNA endonuclease,sgRNA at the same time having a can and a specific genomic sequence complementary to the site(spacer sequence)and Cas9 binding domain. Therefore, Cas9 with sgRNA to form a composite body after the through the spacer sequence of the target specific gene loci and its destruction, so as to achieve the targeted editing of the genome purpose. Previous studies found that losing the enzyme activity of the Cas9（nuclease-deactivated Cas9, dCas9, is also capable of binding by sgRNA targeted to a particular genome, and thereby pioneered the use of dCas9 and sgRNA imaging of specific genomic research.

currently, based on the CRISPR technique in live-cell labeled genomic approach, mainly through the fluorescent protein is connected to dCas9 or sgRNA implemented on the imaging. However, the fluorescent protein having a low brightness, susceptible to photobleaching and cannot be quenched and other shortcomings, in single-molecule imaging of single loci on a limited capacity. This study used molecular beacon MB is a method based on chemical fluorescent group, quenching characteristics of oligonucleotide probe 1, and both ends thereof are respectively connected with one chemical fluorescent group and a quenching group, not with the purpose of the RNA-binding when the MB by itself to form a stem-loop structure exhibits a low fluorescence state, and in the target RNA complementary to the rear of the stem structure of the dissociation into highly fluorescent state, the MB because of its unique imaging advantages to become the current live cell labeling of endogenous RNA primary means one. Through the transformation of the sgRNA structure, Chen Kuang when the laboratory smartly the MB with the CRISPR technology combine successfully developed with MB target sequence(MTS)sgRNA (SL2-sgRNA-MTS), and confirmed that the dCas9 and SL2-sgRNA-MTS to form a stable composite body, and with a specific single loci combination. MB after entering the cell with the composite body of the MTS is complementary, so that the loci are fluorescently labeled. Fluorescence imaging showed that the labeled single-loci in a conventional fluorescence microscope showing a single bright spot (Figure 2). CRISPR/MB R & D and applications is expected to help researchers for the purposes of the genome in the nucleus of the transport and positioning, and with the occurrence of the disease development the relationship between science issues for more in-depth elaboration.

Figure 1: CRISPR/MB works. CRISPR/MB by dCas9,MB and a MB of the target sequence referred to as the MTS, the green of the sgRNA of the composition. dCas9-sgRNA complex by sgRNA of the spacer sequence（purple）binding loci, MB and MTS complementary so that the loci are fluorescently labeled. 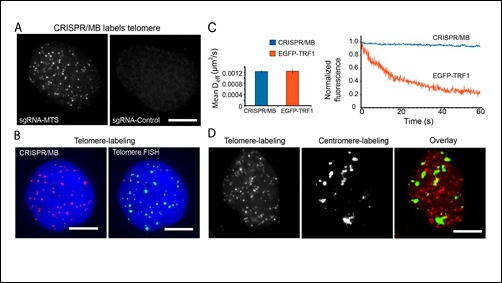 Figure 2: by the CRISPR/MB in the cell to detect specific gene loci. A-B)CRISPR/MB for a single telomere imaging. C)CRISPR/MB compared to traditional fluorescent protein marker means has a higher light stability. D)The CRISPR/MB for telomeric（telomere and centromere（centromere of the two-color mark.