What Makes This CRISPR Stock Better Than the Rest?

Source: What Makes This CRISPR Stock Better Than the Rest?

There are over 10,000 inherited diseases caused by single genetic mutations, and just a tiny sliver of them have effective treatment options. Investors convinced that gene editing technology can solve this problem made CRISPR stocks some of the best performers of the past year, and Crispr Therapeutics AG (NASDAQ:CRSP), in particular, has soared far beyond its peers.

The technology could be a powerful way to churn out valuable new medicines, but it seems awfully early to pick winners. Moving a new drug candidate through clinical trials and into pharmacies is a marathon, and these companies are still tying their shoes.

Has Crispr Therapeutics really been outperforming its peers simply due to a case of name recognition? Let’s take a closer look.

What’s in an acronym?

More than a few analysts are convinced that CRISPR stocks by any other name just don’t smell as sweet to retail investors. Results of a Twitter poll conducted by Brad Loncar showed 86% of the independent analyst’s followers think name recognition is the main force driving Crispr Therapeutics’ stock past its peers.

Loncar’s poll might not be very scientific, but there’s plenty of data to suggest that “fluency” plays a stronger role in stock performance than most of us care to admit. In one study, participants were shown a random list of fabricated stocks with simple and complex names and asked to estimate their future performance. Overall, stocks with simple names were expected to rise by an average of 3.90% while those with complex names were predicted to fall 3.86%.

You don’t need to fabricate names to find evidence that fluency plays a role in stock performance. In another study, investigators showed that stocks with simple names also perform significantly better during their first days of trading on the New York Stock Exchange, but no advantage could be found on timelines long enough to matter to your long-term portfolio.

I don’t have my finger on the pulse of American pop culture, but I’ve seen the gene editing technique misrepresented more times than I can count. I’ve also met quite a few “investors” who don’t know much more about the companies they buy than names and share prices. It’s not hard to imagine scores of everyday investors out there with unreal expectations buying the first CRISPR stock they recognize.

While psychology probably plays an outsized role, you could argue that Crispr Therapeutics has some advantages over Editas Medicine and Intellia Therapeutics. First of all, Crispr will almost certainly be the first to begin a phase 1 trial.

If you think of drug development as a race, all three of these companies are still clumped together at the starting line. Focus in a little closer, though, and you could argue that Crispr is a small step ahead of its peers. While Intellia and Editas still haven’t filed the investigative new drug (IND) applications necessary to begin a clinical study, Crispr Therapeutics has already received approvals for clinical trial applications in several European countries.

The first humans the company will attempt to treat have a blood disorder called beta-thalassemia. These people can’t produce enough hemoglobin on their own, but CTX001-111 is designed to allow them to produce a form of the protein that carts oxygen around the bloodstream.

If Crispr’s candidate shows signs of success in the exploratory study, it’s designed to be expandable into a trial that can support a new drug application. CTX001-111 is already partnered with Vertex Pharmaceuticals (NASDAQ:VRTX), a big biotech partner with plenty of capital, experience, and manpower to develop and successfully launch the drug. 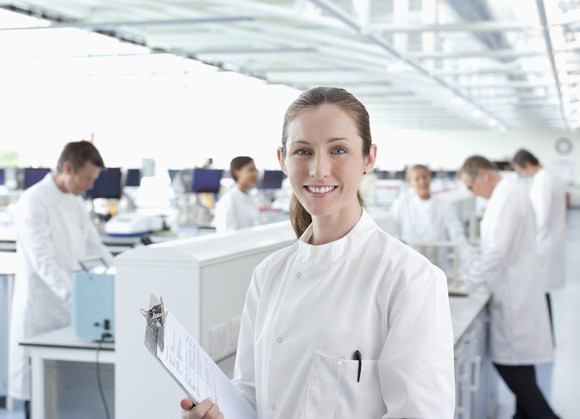 New treatments that train a patient’s own cells to fight cancer produce amazing results, but beginning a new manufacturing process for each patient is costly and time-consuming. A one-cell-fits-many solution is the unofficial brass ring of cancer drug development right now, and investors appear pleased with early signs that Crispr Therapeutics might be able to grab it.

Unfortunately, the early signs come from animal studies, which don’t tell us a whole lot about odds of eventual success down the line. The figures are a bit dated, but in August of 2016, Evaluate Pharma counted 11,012 potential new drugs in preclinical stage development. If you stop to consider that the FDA approved just 46 novel new drugs last year, it becomes clear that you can’t pin a significant risk-weighted value to any new drug candidate without clinical trial data.

With a recent market cap of $3.4 billion, it appears investors aren’t stopping to consider the risks inherent in drug development. Crispr Therapeutics probably owes its relatively high valuation to more than simple name recognition, but I’d steer clear of the stock until the company has some meaningful data to share.