Despite the recent uptick in volatility across the market due to ongoing trade wars and rising interest rates, some top fund managers still think that growth stocks will continue to produce strong returns on capital for investors this year and beyond. Unfortunately, there isn’t exactly a surfeit of attractively priced growth equities at the moment thanks to the aging bull market.

That’s why I think growth investors may need to look toward somewhat riskier areas — such as clinical-stage biotech companies — to find the most compelling growth opportunities in this heated market. Clinical-stage biotechs, after all, have consistently been some of the best-performing stocks for the bulk of the past eight years, and the rapid pace of innovation in the space strongly suggests that this favorable trend isn’t about to evaporate overnight. 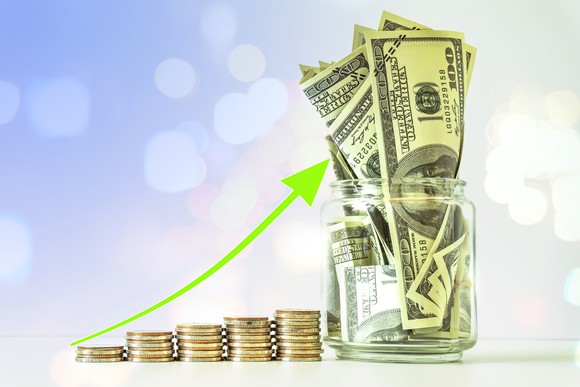 The leader of the pack

Investors have been steadily piling into the fairly new arena of CRISPR gene-editing companies this year, and this rising tide should continue to benefit the leader of the pack, Crispr Therapeutics. The reason?

This fairly novel gene-editing platform could revolutionize the way we treat various cancers, rare diseases, and even how we grow crops and raise livestock. But first, these companies need to prove that their technology is both safe and efficacious in human subjects. And that’s where Crispr Therapeutics comes into the picture.

Crispr and partner Vertex Pharmaceuticals were very close to cementing their front-runner position in the quest to bring a CRISPR-based therapy to market. However, the Food and Drug Administration unexpectedly placed a clinical hold on the duo’s experimental sickle cell treatment, CTX001, at the end of last month.

The good news is that this clinical hold didn’t stem from a specific safety event, as the trial had yet to kick off, but rather the agency taking a conservative approach to a brand-new area of science. Put simply, this hold should eventually get lifted as the FDA becomes more familiar with this groundbreaking technology. As such, Crispr and Vertex should retain their considerable lead in the race to become the first publicly traded companies with a CRISPR human trial under way.

While Crispr’s present market cap of $3.2 billion might seem a tad high for a company with an unproven platform, my view is that Crispr’s stock is, in fact, an incredible bargain at these levels. If the company does get CTX001 back on track and this experimental therapy pans out, Crispr’s broader platform targeting rare diseases and hard-to-treat cancers could be worth billions in annual sales.

Of course, this juicy value proposition is predicated on the notion that Crispr and Vertex will get this regulatory setback resolved in a favorable manner, and that this latest and greatest addition to the gene-editing universe ultimately lives up to the enormous hype.

This untapped drug market is worth billions

Viking is a small-cap clinical-stage biotech with not one, but two promising drugs in midstage trials at the moment. Specifically, the biotech is developing its lead product candidate, VK5211, as a safer alternative to testosterone therapy in hip fracture patients, and its second most advanced experimental drug, VK2809, as a best-in-class treatment for hypercholesterolemia and fatty liver disease.

Even though VK5211 has already produced compelling midstage results that seem to warrant a late-stage trial moving forward, investors are clearly more interested in the fate of VK2809 at this point due to its jaw-dropping commercial potential. Long story short, VK2809 could become an important new treatment option for patients with a potentially fatal condition known as non-alcoholic steatohepatitis, or NASH for short.

At present, there are no FDA-approved treatments for NASH, despite its growing incidence rate and the fact that it’s a leading cause of liver transplants in the United States. And that’s a key reason why some industry insiders have pegged NASH as one of the most valuable untapped drug markets right now.

The bad news is that Viking is a solid year behind the leaders in the NASH race, and there are numerous companies in the hunt to build a NASH franchise as well. So the company will arguably need VK2809’s forthcoming top-line data release to be fairly strong to make a larger pivotal trial worthwhile.

Fortunately, Viking shareholders may have just gotten a sneak peak at VK2809’s midstage data with the recent positive readout of Madrigal Pharmaceuticals‘ highly similar drug, MGL-3196. In short, Viking appears to be exceedingly close to having yet another midstage success with VK2809, potentially giving it two late-stage drug candidates before the end of the year.

While risky, I think both of these clinical-stage biotech stocks are worth the gamble. Crispr still has a lot to prove, but any form of validation in the human clinical trial setting should cause its shares to storm higher. And Viking seems to have a viable shot at becoming a formidable player in the high-value NASH space going forward. That said, the inherently risky nature of development biotechs means that investors shouldn’t buy more of either of these speculative growth stocks than they can afford to lose.