Playing With Crispr, Investors Get Burned

It may seem obvious, but it’s a lesson that never seems to stick with biotech investors: Assigning billions of dollars in value to a medical innovation that’s barely been tested in humans isn’t the greatest idea.

For those who need to learn the hard way, a fresh reminder came Monday. Shares of companies tied to a heavily hyped, but unproven, gene-editing technology called Crispr were sent reeling after two studies published in Nature found a potential cancer risk. 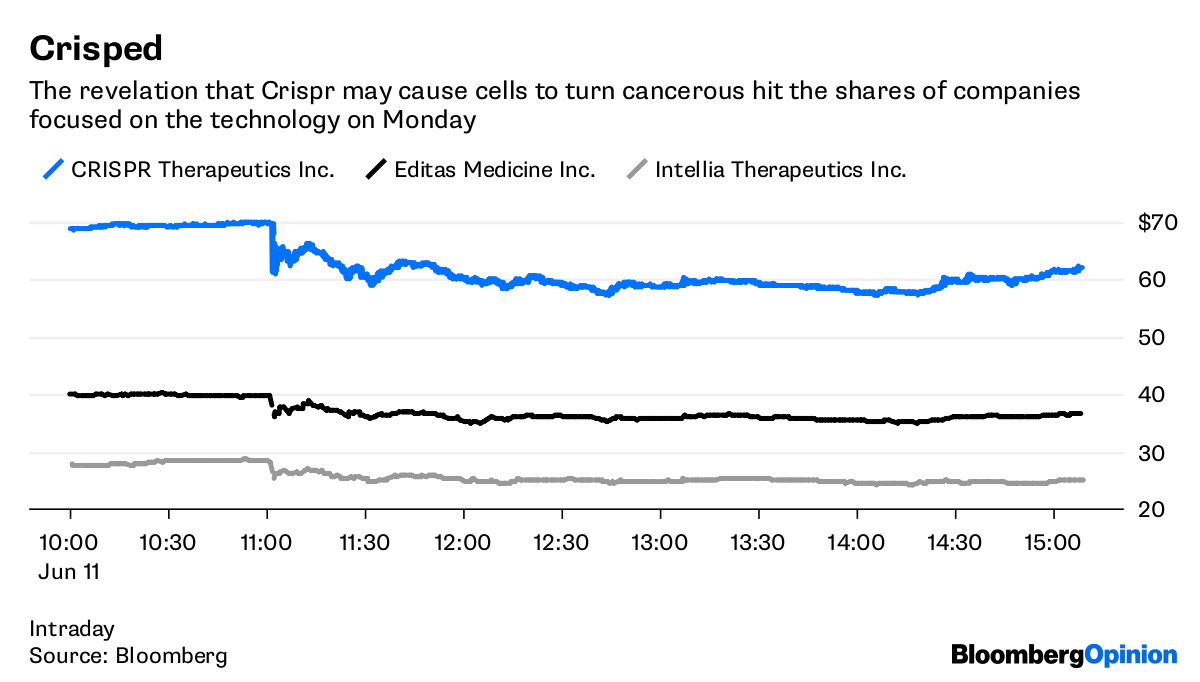 There’s been publicity aplenty for Crispr. The technology received glowing treatment in a recent segment of “60 Minutes,” and it’s set to be the subject of a rather high-concept crime procedural. Its discoverers likely will even receive a Nobel Prize for their efforts. But the approach hasn’t been robustly tested in humans. The Food and Drug Administration recently delayed Crispr Therapeutics Inc.’s planned U.S. trial in sickle-cell patients because it has questions. The Nature studies will likely add more.

Crispr-focused companies have weathered other disappointments that have turned out to be less severe than originally anticipated. Even this cancer finding comes with caveats; it may only be relevant to certain uses in certain diseases. And on Monday, the three main publicly traded firms focused on the technology — Crispr Therapeutics, Intellia Thearpeutics Inc. and Editas Medicine Inc. — all released statements pushing back against the notion that this research will have an impact on their programs.

But the studies’ findings are a reminder of how little we know about potential unintended consequences. And either way, these papers may have a cooling effect on investment, trial recruitment, and the FDA’s willingness to give a broad or rapid green light to Crispr testing.

The bottom line is, these are very early days. There may be many more setbacks, and it could be years before the technology is actually approved and ready to use. In fact, there’s still the possibility of a worst-case scenario that sees Crispr rendered useless by too many bad outcomes.

You don’t have to look far in biotech to find a parallel that illustrates the risks involved and potentially long road ahead. RNAi technology, which works by silencing certain genes, received enormous hype in 1998 after the publication of a pioneering paper that later netted its authors a Nobel prize. But since then, research focused on turning the technology into a drug has been beset by safety issues and disappointment. Alnylam Pharmaceuticals Inc. is finally likely to see an RNAi medicine approved in the next few months after years of trying.

It’s entirely possible that this Crispr setback is short-lived and the technology moves on to transform medicine. But anyone who is willing to make a bet on that had better be extremely patient, and willing to tolerate volatility and downside that’s extreme even by biotech’s bungee-jump standards.

To contact the author of this story:
Max Nisen at mnisen@bloomberg.net

To contact the editor responsible for this story:
Beth Williams at bewilliams@bloomberg.net