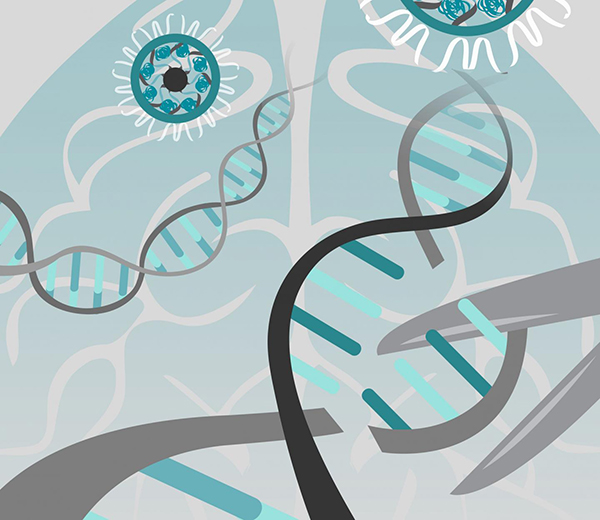 Technologies that can edit genes within the brain have the potential to revolutionize how we treat neurological disorders, and also generate new insights into brain function.  To date, attempts to use clustered regularly interspaced short palindromic repeats (CRISPR)-Cas9 gene editing in the brain has relied on viral delivery of the Cas9 enzyme, but this approach is challenging. Researchers at the University of Texas (UT) Health Science Center at San Antonio, and the University of California, Berkeley, have now demonstrated use of nonviral CRISPR-Cas9 delivery system known as CRISPR-Gold to edit different cell types within the brain.

The team then used the CRISPR-Gold technology to target a single gene responsible for a form of autism known as fragile X syndrome (FXS), in a mouse model. They found that the treatment effectively rescued animals from the exaggerated repetitive behaviours that are symptomatic of the disorder.

The researchers, headed by Hye Young Lee, Ph.D., assistant professor in the Department of Cellular and Integrative Physiology at UT Health San Antonio, believe that they are the first to successfully edit a causal gene for autism in the brain, and reduce symptoms. “The approach can also be used to treat other diseases if we know the gene target," profeossor Lee suggests. This includes many neurological diseases such as epilepsy, and the brain cancer glioblastoma."

The researchers, working with scientists at GeneEdit, report on their studies in Nature Biomedical Engineering, in a paper entitled, “Nanoparticle delivery of CRISPR into the brain rescues a mouse model of fragile X syndrome from exaggerated repetitive behaviours.”

Virus-based systems used to deliver CRISPR-Cas9 gene editing tools to the brain have drawbacks related to immunogenicity, and to toxicity caused by continuous expression of foreign proteins in neurons, the authors explain. As a result there has been significant interest in developing nonviral methods for delivering RNA-guided endonuclease scissors into the brain, but with relatively little progess, the authors note. “… very little is known about the ability of RNA-guided endonucleases to transfect the brains of adult animals via nonviral methods.”

The team was particularly interested in the potential to use CRISPR-Cas9 technology to treat neurological diseases, and focused on fragile X syndrome, an autism-associated, single-gene mutation-based disorder. “FXS is the most common inherited form of intellectual disability and a common single-gene form of autism spectrum disorders (ASDs), accounting for ~2.1% of patients,” they write. There are limited therapeutic options for the condition, and the drugs used can only target individual symptoms of the disorder, rather than the cause."

CRISPR-based editing of genes within the brain, using intracranial injection, could feasibly treat FXS without leading to toxicity that could be caused by systematically disrupting neuronal signalling pathways. And of several genes that could represent targets for CRISPR-based FXS therapy, mGluR5 is “particularly attractive,” because its overactivity has been linked with FXS and also with other ASDs. In fact, the pharma industry has already tried to develop drugs that target GluR5,  but as the reseachers note, “these small molecules failed in clinical trials … Therefore, knocking out the mGluR5 gene (Grm5) locally in brain regions that are hypothesized to cause the behavioural phenotypes in patients with FXS has great potential for treating FXS and autism-related disorders.”

As an alternative to viral systems for delivering the CRISPR-Cas9 editing components to the brain, the team turned to the recently developed encapsulated gold nanoparticle-based CRISPR-Gold platform to deliver the Cas9 ribonucleoprotein (RNP) to the brain. A preliminary series of in vitro tests indicated that CRISPR-Gold delivery was neither toxic to neuronal cells nor did it affect neuronal functioning. Initial in vivo studies in two different transgenic mouse models showed that using the CRISPR-Gold system to deliver either the Cas9 RNP or a different CRISPR RNA-guided endonuclease (Cpf1), could efficiently edit two different fluorescence genes, in neurons, within specifically targeted areas of the brain. “CRISPR–Gold may therefore be able to treat neurological disorders and elucidate the function of genes in brain circuits, despite only editing a small fraction of the total number of brain cells after an intracranial injection,” the team writes.

Non-neuronal, glial cells in the brain can also play key roles in maintaining and regulating neuronal functions, and dysfunction in glial cells is responsible for different types of brain disorder, so the team also wanted to investigate whether CRISPR-Gold could be used to edit genes in brain cells other than neurons “… there is a great interet in editing the genes of glial cells,” they continue. In a series of studies in one of the mouse models they were able to demonstrate that Cas9 or Cpf1 RNPs delivered using the CRISPR-Gold platform could delete target genes in different cell types in the brain, including astrocytes and microglia, as well as neurons.

The team then moved on to evaluate use of CRISPR-Gold both in vitro, and in vivo, as an approach to treating FXS autism. Preliminary in vitro tests showed that the technology could be used to knock out the mGluR5 gene, Fmr1, in laboratory grown cells. They then injected the mGlu-R5-CRISPR directly into the striatum of Fmr knockout mice, a recognized model for FXS. The results confirmed that the CRISPR-Gold treatment led to 40-50% reductions in mGluR5 mRNA and protein levels, without generating any evident immune response or weight changes in the recipient animals.

Encouagingly, the treatment also reduced the excessive digging and increased jumping behaviors in the FXS mice, which are characteristics of autistic phenotypes in ASD model animals, and which exemplify repetitive behaviours that are one of the core symptoms of ASDs in humans. Excessive digging behaviour was slowed by 30%, and leaping behaviour was reduced by 70%. “Taken together, RISPR-Gold-mediated gene editing of adult mouse brains, via the nonviral delivery of Cas9 RNPs, can rescue mice from behavioural deficits,” the team notes. “CRISPR–Gold may significantly accelerate the development of brain- targeted therapeutics and enable the rapid development of focal brain-knockout animal models.”