CRISPR-Induced Mutations Give Wing to a Butterfly Effect

Source: CRISPR-Induced Mutations Give Wing to a Butterfly Effect 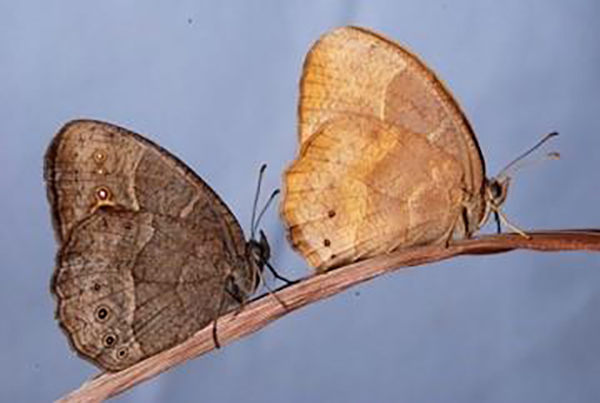 The breathtaking colors and patterns on butterfly wings come down to genes, which have been thought to be of two kinds—genes for pigments and genes for wing scales. Whereas pigments are chemicals that give rise to colors by absorbing and reflecting different wavelengths of light, wing scales are physical structures that reflect and refract light, adding color through wave interference. Despite these mechanistic differences, and contrary to expectations, pigment colors and structural colors in butterfly wings appear to be influenced by the same genes.

This new finding, from the National University of Singapore, may have implications beyond the laboratory. For example, it could lead to industrial methods for generating colors without resorting to pigments, which may fade, or metal-containing nanomaterials, which have proven hard to fabricate. Instead, live-cell bioengineering may be used to fabricate biophotonic materials, finely sculpted structures that manipulate light to give rise to shimmering, iridescent colors.

National University of Singapore scientists used CRISPR/Cas9 to disable genes that function in the melanin pathway of squinting bush brown butterfly of East Africa Bicyclus anynana. This intervention, the scientists found, altered wing color in an unexpected way. It causes in the surface structure and rigidity of wing scales.

Details of this work appeared July 3 in the journal Cell Reports, in an article entitled, “Melanin Pathway Genes Regulate Color and Morphology of Butterfly Wing Scales.” This article describes how the scientists examined the functions of five melanin and three ommochrome biosynthesis genes in controlling the color and morphology of the wing scales of B. anynana. Specifically, it explains how knocking out these eight genes CRISPR/Cas9 allowed the scientists to identify the enzymes and biosynthesis products needed for generating each of the wing-scale colors.

“This work contributes to our understanding of the genetic mechanisms that establish complex color patterns in butterfly wings,” the article’s authors wrote. “We also showed that melanin biosynthesis pathway products are acting both as pigments and as scaffolds to build the fine cuticular structures of a wing scale and may therefore be important in creating as well as limiting the diversity of the structural and pigmentary colors observed in butterflies.”

When a mutation prevented the pigment dopa-melanin from being generated, an extra sheet of chitin, a fibrous component of the exoskeleton, formed horizontally on the upper surface of the wing scale. And when a different mutation blocked the pigment dopamin-melanin, vertical blades of chitin appeared. “Most dramatically,” the article’s authors emphasized, “mutations in the yellow gene lead to extra horizontal laminae on the surface of scales, whereas mutations in DDC gene lead to taller and sheet-like vertical laminae throughout each scale.”

"Some butterflies can have vivid hues just by having simple thin films of chitin on their scales that interfere with incoming light to create shades known as structural colors without producing corresponding pigments," said Antónia Monteiro, the senior author of the current study and a biologist at the National University of Singapore's Faculty of Science and Yale-NUS College in Singapore. "Light beams reflecting off the top and bottom surfaces of the chitin layer can interfere with each other and accentuate specific colors depending on the thickness of the film, so our results might be interesting in this context."

Wing colors and patterns are critical for butterflies to hide from predators and signal potential mates; should the mutations introduced in the lab occur naturally, they could jeopardize the insects' survival and reproduction. "Butterfly color has always been described as either pigmentary or structural, but our work identifies the first candidate genes that may constrain the evolution of both of these forms of generating color," asserted Monteiro.

"The morphology of wing scales is highly diverged; however, the genetic and molecular mechanisms underlying the development of butterfly wing scales have just started to be studied, and melanin products are one of the multiple molecules likely playing a role in this process," added Yuji Matsuoka, a postdoctoral researcher and the first author of the current study. "Further studies using other butterfly species and other cuticular components will help us understand more about the evolution and development of butterfly wing scales."