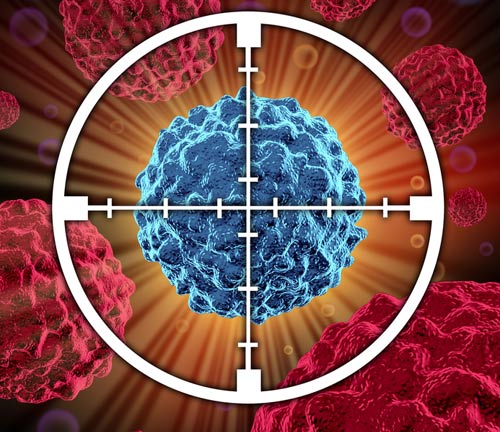 One of the challenges of using CRISPR in cancer patients is ensuring it can distinguish between a malignant cell and a healthy cell. Yet, researchers at the ChristianaCare’s Gene Editing Institute have discovered that a mutation unique to certain cancer tumors may serve as a potential signal for safely deploying CRISPR gene editing enzymes to disarm DNA that makes cancer cells resistant to treatment, without affecting healthy cells.

Their study is published in Molecular Cancer Research in an article titled, “Kinetics of Nuclear Uptake and Site-Specific DNA Cleavage during CRISPR-Directed Gene Editing in Solid Tumor Cells.”

“From a clinical perspective, the well-known toxicity of chemotherapy often remains a serious barrier to successful treatment and even enrollment in clinical trials. Even though CAR T-cell therapy is considered a breakthrough for many cancer types, the cost, the recently identified self-immunity, and even potential for biotherapeutic toxicity remain an impediment for widespread implementation. Currently, CAR T-cell therapy is not an option for non–small cell lung carcinoma (NSCLC); thus, there is an unmet medical need for the development of innovative approaches for the treatment of lung cancer,” the researchers wrote.

Eric Kmiec, PhD, director of ChristianaCare’s Gene Editing Insitute and principal author of the study, and his team investigated the feasibility of using CRISPR-directed gene editing in combination with standard of care treatment of solid tumors, including NSCLC. They decided to develop a CRISPR-gene editing strategy to knock out a gene called nuclear factor erythroid-2-related factor 2 (NRF2).

The Gene Editing Institute has done multiple tests in animals to establish that disabling NRF2 with CRISPR increases sensitivity to chemotherapy. “Previously, we discovered that successful functional knockout (KO) of the NRF2 gene in chemo-resistant lung cancer cells significantly increased the anticancer activity of cisplatin, carboplatin, and vinorelbine in both cell culture and mouse models. Our results prompted further exploration of the feasibility of innovative therapeutic approaches aimed at reducing the clinical side effects of chemotherapy,” noted the researchers.

The researchers are now conducting tests in animals to further confirm selective targeting of NRF2 in squamous cell tumors and to assess any concerns in order to lay the foundation for a clinical trial in patients. The trial would test whether using CRISPR to knock out the NRF2 gene in squamous cell carcinoma lung cancer tumors improves the efficacy of conventional chemotherapy and radiation treatments. The researchers noted that the presence of the NRF2 gene in tumors confers a “dismal prognosis” because NRF2 is a cellular protector. This principle applies to cells that are both healthy and malignant. While healthy cells are protected from DNA damage induced by reactive oxygen species, malignant cells are protected against chemo- or radiotherapy.

However, Kmiec noted there are also other cancers, such as esophageal, head and neck, and certain forms of uterine and bladder cancer, that have similar features. The cancers produce tumors that are frequently protected by the NRF2 gene. Like squamous cell tumors, they also have mutations that create a protospacer adjacent motif (PAM) site that can serve as a target for keeping CRISPR edits focused exclusively on tumors.

Kmiec and author Kelly Banas, PhD candidate, said moving quickly with CRISPR to disable NRF2 could improve the efficacy of conventional treatments and potentially lower the dosages required to shrink tumors.”I was basically looking for something unique to the NRF2 gene in tumor cells that could essentially tell CRISPR ‘here is the site where I am supposed to bind and do my work,’” Banas explained.

The CRISPR-directed gene editing strategy could advance as an effective augmentative therapy to approach patients with locally advanced lung cancer, especially where the current standard of care has failed and there may be resistance to standard chemotherapy.