original SWISS: multiplexed orthogonal genome editing in plants with a Cas9 nickase and engineered CRISPR RNA scaffolds for the title published in the Genome Biology journal

the CRISPR/Cas9 system has been hit built a super-molecule Toolbox. From Streptococcus pyogenes（Streptococcuspyogenes the Cas9 protein by the RuvC and HNH two nuclease domains, which are cutting non-targeted chain and the targeting chain. By mutation of the first 10 bits of the aspartic acid(Asp10)and/or the first 840 bits of histidine（His840, And Cas9 will become a nicking enzyme nCas9 or lose nuclease activity of dCas9 to. Cas9 is used on the genome to produce DNA double-strand break（Double Strand Break, DSB; and a pair of nCas9 can also be used on the genome to produce DSB, nCas9 (D10A)is also used to cytosine bases edit system Cytosine Base Editor, CBE and adenine bases edit system Adenine Base Editor, ABE development; the dCas9 is often used for integration of a variety of effector proteins thus achieving CRISPR-mediated gene transcription activation CRISPR Activation, CRISPRa, and gene transcription inhibition（CRISPR Interference, CRISPRi, and genome imaging, and epigenetic modifications, etc. However, the CRISPR/Cas9 system and derived technical system is applied to multi-edit, often can only perform one type of genome editing events.

currently, we have developed multiple orthogonal genomic editing strategy mainly includes the following several aspects: one strategy is to use a truncated sgRNA control Cas protein nucleic acid enzyme activity to regulate gene expression, while the use of the full-length sgRNA in another point for the knockout; the second strategy is the RNA ligand of the hairpin structure integrated into the sgRNA backbone, the formation of the stent RNA（Scaffold RNA, scRNA, the dCas9/scRNA composite body by a hairpin structure recruitment of gene activation or suppression factor, in different sites at the same time to achieve gene transcription activation and inhibition of the dual function; the third strategy is to use multiple homologous to the CRISPR systems in different target sites simultaneously achieve gene activation, inhibition and deletion of triple feature. These genome engineering of multi-strategy multi is in the bacterial, yeast and human cells developed, can be used to generate different edit types of plants to multiple genome editing system of reports is still relatively small.

with the Cas9 and dCas9 compared nCas9 in multiplex genome editing on the potential and not fully developed. Due to the CBE and ABE use the same nCas9 （D10A, therefore, Institute of genetics and Developmental Biology Institute of high pink clouds Research Group recently in the open access journal Genome Biology has published based on a nCas9 nucleic acid enzyme of the multiple orthogonal genomic editing system, and name the system as a single system to produce multiple simultaneous editing system, Simultaneous and Wide-editing Induced by aSingle System, the SWISS one. The SWISS use two containing different RNA ligand of the RNA scaffold （scRNA, respectively the recruitment of the corresponding binding protein fusion of a cytosine deaminase or adenine deaminase, at the same time in different target sites, respectively, to achieve the CBE and ABE two bases edit. Reuse nCas9 incision enzyme activity, the pair of sgRNA is introduced into the SWISS system, in the third target point is generated at the DSB, so that the SWISS became a triple C-to-T, A-to-G and Knock out the editing capabilities of the CRISPR system. The high pink clouds research group of PhD students Li Chao of this article, the first author, the high pink clouds researcher and Wang Yan Peng young researchers for joint communication to the author. 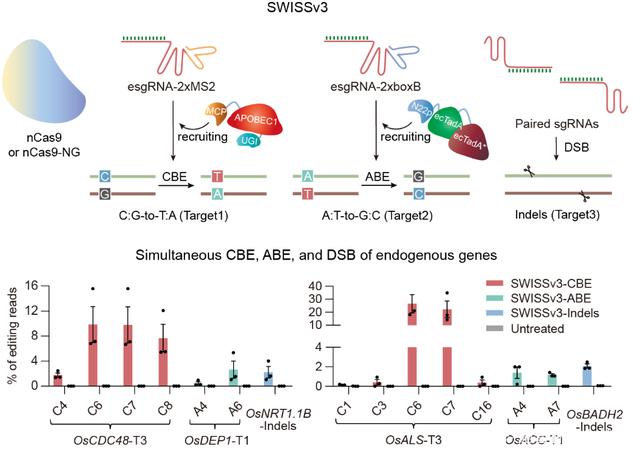 on: SWISSv3 strategy diagram; next: rice protoplasts to test the two sets of target points

Researchers first, the RNA ligands to the recruitment of CBE and ABE bases edit carrier optimized further using the report system are used for mediated CBE��ABE base editing functions efficient scRNA conducted a high-throughput screening, and with a rice endogenous target sites of the candidate scRNA verified. The final choice of having the 3 end of the RNA ligand of esgRNA-2 x MS2 and esgRNA-2×boxB, respectively, for the Mediated CBE and ABE of base editing functions. Development of SWISSv1. 1 for implementing the C-to-T and Knock out the dual function of editing; SWISSv1. 2 used to implement the A-to-G and Knock out the dual function of editing. In SWISSv2 while the expression of cytosine deaminase module and adenine deaminase module, to achieve C-to-T and A-to-G dual function of editing; at SWISSv2 the introduction of the pair of sgRNA, become SWISSv3, to achieve C-to-T, A-to-G and Knock out a triple function edit(figure). Also, the use of Cas9, the PAM variant Cas9-NG to further expand the SWISS system in the genome of the target sequence selection. In rice plants, the SWISSv3 in rice plants simultaneously produce three kinds of editing events the efficiency is 7. 3 percent.