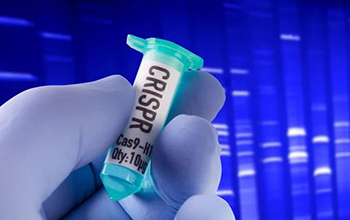 Scientists used light as a trigger to make rapid and precise cuts in genomic material.

In a series of experiments co-funded by the National Science Foundation, scientists at Johns Hopkins have used light as a trigger to make quick, precise cuts in the genomic material of human cancer cell lines. The researchers cut the DNA within seconds using a molecular scalpel known as CRISPR and were able to observe how repair proteins arrived at the damage site and fixed it within minutes.

Results of the experiments, published in the journal Science, not only reveal new details about the DNA repair process, but also are likely, the researchers say, to aid understanding of how this process can cause aging and many cancers.

“Our new system of gene editing allows for targeted DNA cutting within seconds after activation,” says Yang Liu, a member of the team. “With previous technologies, gene editing could take much longer — even hours.”

The powerful CRISPR tool has enabled scientists to easily change, or edit, DNA sequences and alter gene functions, and has accelerated research on gene-linked conditions.

Adapted from a naturally occurring gene editing system found in bacteria, CRISPR uses small sequences of genetic material, called RNA, as a kind of guide that is coded to match and bind to a specific sequence of genomic DNA within a cell. The CRISPR molecule also contains an enzyme called Cas9, which acts as the scalpel to cut out the DNA sequence.

For the new experiments, the scientists modified the CRISPR-Cas9 complex by engineering a light-sensitive RNA molecule that allows the CRISPR complex to cut genomic DNA in living cells only when exposed to a particular wavelength of light.

The team then delivered an electric pulse to cultures of human embryonic kidney cells and bone cancer cells, which opened pores in the cells’ membranes and allowed this new, fast CRISPR complex (vfCRISPR) to enter.

By shining light on the cells, the researchers were able to turn on vfCRISPR and track the amount of time it needed to cut the DNA. They found that more than 50% of the DNA target sites were cut within 30 seconds. This fast trigger enabled them to monitor the subsequent cellular response, including DNA repair, as it happened.

“Timing is everything when studying or modulating the dynamic properties of life at molecular and cellular levels,” says Manju Hingorani, a program director in NSF’s Division of Molecular and Cellular Biosciences, which funded the research. “With this new CRISPR technology, scientists can get to the right place on the genome at the right time to catch the action.”