how to identify the CRISPR/Cas9 point mutant mice, transgenic mice and ES targeting technology to build a rat?

the year of the rat says the rat series, weekly update, specifically to answer the size of the rat shovel shit official in cultured rat process often encountered in the breeding and identification of a class of problems, at the same time to solicit questions, any gene editing rat breeding or the identification of puzzles all can throw to a small tournament, small tournament back to you or unified later in the content for everyone to make a detailed answer.

genetically engineered mice genotype identified by PCR the basic principle is the use of genetic engineering the mouse genome with the wild-type mouse genomic sequence differences of Mouse genomic DNA as a template for PCR, and gel electrophoresis comparison of different genotype-specific product size, according to the Strip size to distinguish between mice of different genotypes. On the period, tells us about the CRISPR/Cas9 gene knock-in mice for the identification, today we’ll learn the CRISPR/Cas9 point mutant mice, transgenic mice and ES targeting technology to build a rat identification.

A, the CRISPR/Cas9 point mutation mice how to identify it?

point mutation since only a single base or a few bases increase, deletions or substitutions, in the electrophoresis on the mutated fragment with the wild-type stripe size are indistinguishable. Therefore, only the PCR is not identified, but also requires a combination of sequencing or restriction enzyme digestion to identify.

select in the occurrence of point mutations of the upstream and downstream fragments to design primers, the primers were designed, but also to consider mutations upon whether the enzyme cut site, the enzyme cut points on both sides of the fragment size with the distinction. The first PCR amplification, then the amplification product after electrophoresis cut plastic or sequencing. If the mutation after the point of the sequence happens to be an enzyme-specific recognition sites, may also be with an enzyme effective test to verify the enzyme cut the power the occurrence of point mutations of the fragment is cut into two sections, wild-type will not be enzyme recognition cut. If there is no introduction of restriction sites, it is only through the will of the PCR product sequencing, and then by the peak analysis purpose of the base whether there is a mutation.

use the F/R amplification, the Strip 1 is of the size of a wild and positive strips, cut plastic recycling Feed test. 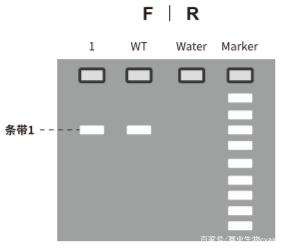 second, the transgenic mice how to identify it?

transgenic mice due to technical limitations, the presence of copy number and insertion site does not determine the issue, only the judgment-positive. The General design of 3 or more pairs of primers, if at the same time identified as positive is determined to be positive mice. The process of reproduction, it is recommended that a different line of F0 and WT, respectively, passaged, and then by the expression level of validation to filter out the best passage of the line.

third, the ES build of the mouse how to identify it?

using the ES technology to build the rat, the identification of methods and design principles with CRISPR/Cas9 is similar. The ES technique utilizes Neo screening, the game industry TurboKnockout technology can be obtained from the puncturing of the elements of the F1 generation of small���, No need for Neo to be validated.