Get rid of“to lean”curse! Xiangya Hospital use this technology to make severe to the poor children“out of poverty”

get rid of“to lean”curse! Xiangya Hospital use this technology to make severe to the poor children“out of poverty”

Central South University Xiangya experts:heavy in lean patients often every 2-3 weeks to lose blood, not only is the treatment costly, and may be due to serious complications leading to death, generally not live beyond adulthood.

by“γ-globin re-activation”therapy, the patient hematopoietic stem cells in the normal gene inspired, and then transplanted into its body, let these“life seed”in the body to take root, germination, and thus help the patient get rid of this require regular“refueling”of life.

thalassemia is the world’s most widely distributed, involving the crowd in one of the most single-gene genetic disorderis a group due to globin synthesis disorders caused by hereditary hemolytic anemia, the patient hemoglobin abnormal, red blood cells are unable to the body to deliver enough oxygen points.

this disease is the World Health Organization as harmful to human health for six common diseases one of theis also China’s Guangdong, Guangxi, Hunan and other southern regions the most common and most damaging genetic diseases one of the only Hunan resident population in poverty gene carrying rate of up to 7%, the gene carrying the number of about 500 million.

currently, the Thalassemia major maintenance treatment method is a normative lifelong blood transfusion and deferoxamine treatment, not only efficacy is limited, and because blood limited resources, the cost of treatment is extremely expensive, but also inevitably because of the frequent blood transfusions cause severe complications leading to death. 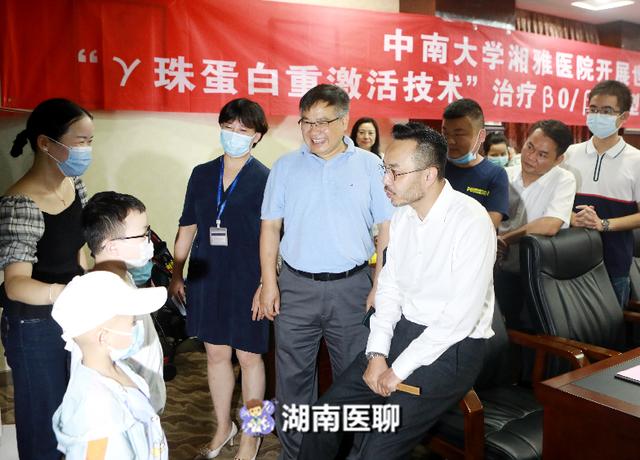 and internationally recognized as the only cure to poverty reduction the approach is allogeneic hematopoietic stem cell transplantation, but it only applies to part of the can wait until the right type of patient, and faced implant failure, infection and graft-versus-host disease and other risks.

and γ-globin re-activation of“seed”, the first from the patient extraction of hematopoietic stem cells in the laboratory for γ-globin reactivation, the patient bone marrow had a genetic defect in the stem cell removal, and then the activated stem cells back to the patient’s body, allowing it to generate normal blood cells. This not only solves the donor source of the difficult problem, but also to avoid rejection of the risk.

stimulate the silencing of normal gene γ, in children with graft 1 month after get rid of blood transfusion

heavy to the lean includes a heavy-duty α to poverty and heavy β to poverty reduction,heavy duty α to poor fetal often in the third trimester of pregnancy fetal death in utero or was born within a few hours after death; heavy duty β in poverty children often after the birth of 3-6 months begin to show symptoms, more performance for severe anemia, pale, enlarged liver and spleen, jaundice, poor growth, if not for normative blood transfusion and iron therapy, and more in the minors years ago death.

β in lean patients is due to β gene defect, which leads to anemia. For this gene defect, the main method of treatment in two ways:

A is the normal β gene introduced into a cell, and let it replace the patient’s own beads to protein;

the second is to stimulate the fetal period normal, after the birth of the silencing of the γ gene, the expression of the patient’s own fetal hemoglobin, allowing it instead of the β gene to the exercise of the oxygen-carrying function, correction of anemia status.

Xiangya Hospital Hematology team and East China Normal University Liu Ming Yiu Professor research team is taken by the second method. The accepted treatment of the two patients were 7-year-old and 8-year-old boys, are weight-type β-to the lean patients with genotype respectively for β0/β0 and β+/β+ – type is.

in before receiving treatment, they were every 2 weeks and 3 weeks will require the infusion of 2 units of concentrated red blood cells. Since β0/β0-type heavily to the reduction of the β gene is not fully expressed, repair requirements and risk is too large.

they are not fellow full consistency of the donor in the unrelated bone marrow library also do not have matching donors in the be the parents to do the donor of haploid transplant before and after full informed consent after the child joined the clinical research team choose to activate the silencing of normal gene γ, allowing it to activate the“life seed.”

compared to the United States before the conduct of β0/β+ – type gene therapy clinical trials, the β0/β0 of the treatment more difficult. β0/β+ – type patients had a partial gene is normally expressed, this part of the gene can help the γ gene, the activation of the γ efficiency requirements to be lower.

β0/β0 patients with type due to the two β genes are not completely expressed, to achieve clinical efficacy, the activation efficiency and the depth of the effective genes account for a percentage of the more demanding. Because γ-globin re-activation after reinfusion of hematopoietic stem cells cannot be filtered, only the effective excitation of the γ gene of the cell, the more“normal fullness”of the“seed”was more,“invalid shriveled”of the“empty seed”only less,“seed”the growth of success rate is greater.

Liu Ming-Yao Prof, we in gene therapy effectiveness and safety to do a lot of research, the current γ-globin reactivation efficiency of over 90%, to ensure a stable and lasting clinical efficacy.

we hope to have more of a technological breakthrough, the first-class basic research and clinical closely together, and drive clinical transformation, so that the majority of genetic diseases patients and families really enjoy the scientific research bring benefits.

after peripheral blood hematopoietic stem cell mobilization and apheresis, by the medical research center of the separation after completion of the γ-globin re-activation, and then reinfusion into the pre-treated two children with the body, so that they passed the pancytopenia related, infection related, drug toxicity related and immune reconstitution off, etc., γ-globin reactivation in hematopoietic stem cell transplant in their body to re-restore hematopoiesis.

post-transplant 1 month, two children with it from a blood transfusion. Currently transplant after nearly 3 months, the child’s hemoglobin remained stable at 120g/L or more. 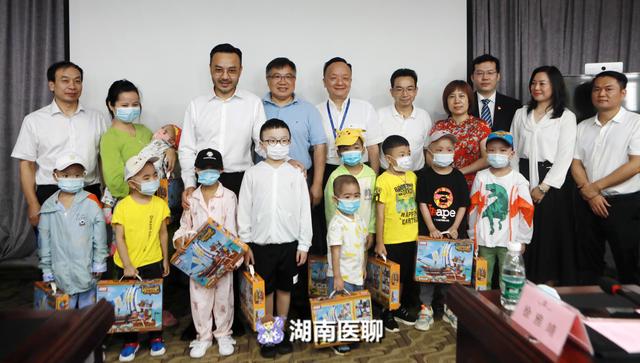 “there are some families, in order to give to poor children with type while the regeneration one, but unfortunately the second child still got to lean, which caused a lot of family tragedy, I hope society can pay more attention to such children.”pay Bin Deputy chief physician said, the ideal state is to achieve heavy to the lean Zero was born, but for the already born to poverty in children, it can only be positive to create treatment opportunities and the executable program, as soon as possible to solve this part of the population’s physical and mental health problems.

in Hunan, the need for hematopoietic stem cell transplantation heavy to lean on there are close to 500 examples, medical inputs and medical technology advances made a great requirements.

in order to solve the donor source of difficulty leading to illness delays, pay for Bin Deputy chief physician of the team successfully designed an efficient, safe and economic thalassemia haploid transplantation programme, so that almost all poor patients have a donor available, become the country to carry out haploid hematopoietic stem cell transplantation in the treatment of thalassemia more of one of the units, and the formation of the graft treatment of the whole disease management team.

Central South University Xiangya Hospitalin Hunan Xiangya medical and Health Foundation and the Hunan Satellite TV famous host Wang Han and Mango TV brand strategy Department Director Liu Hui and other social caring people to support, by means of various types of the power of the media to increase awareness, encourage the community through donations, volunteer activities, patient assistance, etc., the active support and participation to poverty reduction, prevention and control activities, multiple channels to raise funds for the many anemia a disease of the family to provide whatever help.

“this is one for the human health history has a very important meaning of the day, this technique let’s touch to the medical frontier, felt the technology engine of Mighty Power. Thanks to scientists and the medical scientists of collaboration and innovation, allowing us to plug in the science and Humanities wings, and help more patients towards the health of the sky soar.” Wang Han said.

as a bit of poverty the mother of the child, Liu Hui Ms. very mixed feelings:“a lot to poor kids and families are faced with the cost of treatment and Transplant risk of the two mountains, we have been expecting gene therapy successful to this day. Believe this technology will allow more poor children“out of poverty”, to regain a new life.”

“the focus on hematopoietic stem cell transplantation in the treatment of thalassaemia so long after, very pleased to be able to witness the‘γ-globin re-activation’technology for patients brings more convenience, safety and exact therapeutic effects. To overcome the β0/β0-type this a storm, it means that the vast majority of transfusion-dependent β to the poor will be able by this treatment strategy to give the cure.”< strong>Chen, Fang-Ping Professor, said the future“γ globin heavy stress��”Technology will become the optimum effect, the feasibility of the largest and best security of the β to the depleted treatment solution.

we have the ability to provide new and full of thalassemia solutions that save many due to poverty crippling, deadly and impoverishing the poor family.

Zhang Xin, party Secretary of expression on all levels of government, cooperation and caring people and the media to thank. He said that clinical studies of the initial success from a wide range of clinical applications and longer distance, the hope that clinical and research teams continue to maintain a rigorous scientific attitude, seek truth from facts, serious and meticulous, successfully completed the established clinical research goals, and further in-depth cooperation, the development of more effective treatment options and new technologies for the benefit of more people.

Stone Country Yong, the Director said, to poverty reduction is not only is the Hunan, is China and even the world range, especially the“One Belt and One Road”area of a medical problem.“γ-globin re-activation”this groundbreaking technology is a major breakthrough, and has achieved remarkable results, will greatly improve poverty reduction in the cure rate. Hope the research team and clinical team constantly sum up experience, innovation, create brilliant, the better for all of humanity health services.

special statement: the above content(such as pictures or video is also included)is a self-media platform“Netease number”of users to upload and publish the platform only to provide information storage services.

Notice: The content above (including the pictures and videos if any) is uploaded and posted by a user of NetEase Hao, which is a social media platform and only provides information storage services.