CRISPR Therapeutics (NASDAQ:CRSP) may be one of the best biotechnology stocks to own in 2020. It’s one of a few companies leading the way in gene-editing therapies, a market that the analysts at MarketsandMarkets expect will be worth $11.2 billion by 2025.

CRISPR’s shares are up about 50% year to date, propelled by positive developments within its pipeline. The stock is outpacing both the iShares Nasdaq Biotechnology ETF and S&P 500 by a wide margin, and looks positioned to charge higher over the long term. The company leads other gene-editing companies in the hematology space and offers a novel treatment in the immuno-oncology space with plenty of catalysts that could propel the stock over the next 12 months.

Let’s take a closer look at CRISPR’s portfolio, its position in the competitive landscape, and its current valuation to determine if its stock is a buy today. 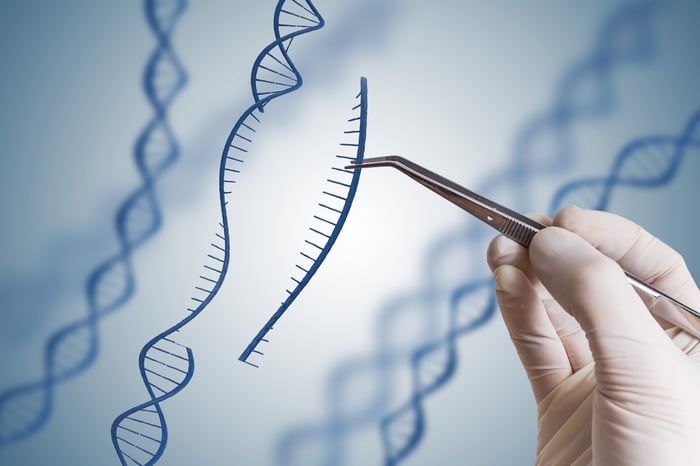 Competitive portfolio with plenty of upside

Gene editing has garnered the attention of investors and the pharma industry in the past decade, but what exactly is this innovative technique? There are multiple types of gene editing, but the most promising approach is one that uses a CRISPR platform that allows scientists to alter an organism’s DNA and potentially cure previously incurable diseases. The CRISPR platform is also referenced as CRISPR/Cas9, with the Cas9 enzyme playing a vital role in this particular gene-editing technology.

CRISPR Therapeutics has an expanding portfolio of potential treatments for a variety of diseases. It has nine product candidates in its development pipeline to treat hemoglobinopathies (blood disorders affecting the hemoglobin), cancers, diabetes, and rare genetic diseases. Its hemoglobinopathies program has been the major driver of its recent stock gains.

TDT is a severe type of beta thalassemia that is characterized by severe anemia and lifelong dependence on blood transfusions for red blood cells, which carries risks of complication. The Climb-111 trial demonstrated clinical proof of concept of CTX001 treatment on two patients with TDT with different genotypes. Patient 1 achieved transfusion independence in 15 months after a CTX001 infusion, whereas Patient 2 reached independence five months after infusion.

SCD is an inherited disease that causes the body to produce abnormally shaped red blood cells, leading to cells that are sticky and could obstruct blood flow and oxygen. Climb-121 showed that at nine months after CTX001 infusion, the two patients were free of vaso-occlusive crises, or obstruction of circulation, and were transfusion independent.

Data from both the TDT and SCD studies gave early evidence the CRISPR/Cas9 gene-editing platform offers significant value and could lead to a new class of medicines that provide durable and more effective treatments for serious diseases.

While this is only preliminary data, CRISPR Therapeutics currently has a total of five patients dosed for the Climb-111 study (for TDT) and plans to expand enrollment to pediatric patients 12 years or older. The Climb-121 study has dosed two patients and is open for concurrent dosing.

The companies expect to report additional data in the second half of this year. Investors should stay tuned to these updates as CRISPR’s CTX001 holds promise to be a curative therapy if it continues to succeed over the course of drug development.

While the blood disorders area offers promise, the oncology (cancer treatment) pipeline has even greater potential to create dependable revenue streams. The company is using its CRISPR/Cas9 gene-editing platform to develop novel chimeric antigen receptor (CAR) T-cells that can be administered “off the shelf,” meaning a single batch should be useful in treating a broad group of patients with improved safety and efficacy (as opposed to CAR T-cell therapies made from a patient’s own T-cells and are then re-introduced to that patient.)

The CAR T-cell market offers tremendous upside to investors and is expected to reach $8.4 billion by 2027, with a compound annual growth rate (CAGR) of 14.9%. CRISPR’s management believes that its novel CAR T-cell therapy could offer a superior product over the current therapies that are limited in their ability to treat solid tumors and could offer a more effective therapy in the solid tumor cancer treatment space that’s expected to be worth $425 billion by 2027. CRISPR has drugs in clinical development to treat B-cell malignancies (CTX110), multiple myeloma (CTX120), and solid tumors and blood cancers (CTX130). Success for any one of these drug candidates could pave the way for treatments across a variety of tumor types and catapult the company into dominance of the immuno-oncology space.

Edge in the competitive landscape

The gene-editing space is highly competitive — CRISPR’s closest competitors Intellia Therapeutics (NASDAQ:NTLA) and Editas Medicines (NASDAQ:EDIT) are also using CRISPR/Cas9 technology to develop their therapies. While there is no certainty that these treatments will be better, the goal of these companies is to stay ahead of their competition through strategic partnerships and acquisitions — which in many cases could provide a significant boost to resources and expertise.

Let’s take a closer look at the competitive landscape of hematology (blood disease).

CRISPR Therapeutics has an early edge because it has released early data in humans through its phase 1/2 trials of CTX001 for TDT and SCD, has plenty of cash for operations, and boasts a strategic partnership with Vertex. Meanwhile, Intellia’s IND application was accepted by the Food and Drug Administration in March, and it will initiate its phase 1/2 trials this year. Editas is the laggard in this space — its trials are in the IND-enabling stage, which is a trial in preparation for Investigational New Drug (IND) application submission, and it plans to submit its application by the end of the year.

More recently, CRISPR raised $450 million in a public offering of common stock which will help it fund its operations, and hopefully allow it to keep its current lead in hematology development. With that said, CRISPR plans to report additional data on the CTX001 trial in the second half of the year and CTX110 at the end of the year. The proceeds will also support operations in its other trials that are initiating for CTX120 and CTX130. The second half of the year looks promising for the company and could drive the stock to hit new highs before 2020 is over.

CRISPR stock is nearing its 52-week high of $97.82 and could achieve a new high over the next 12 months. Many investors are excited about the potential for CRISPR’s novel CAR T-cell therapies and the potential for this new class of treatments to become a franchise in the oncology space. CRISPR’s recent development successes in hematology treatment and CAR T-cell therapy for cancer offers tremendous upside and could catalyze the stock further with positive data near the second half of the year. 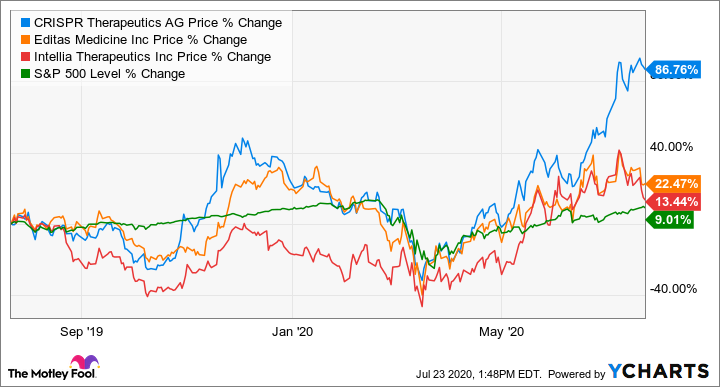 While CRISPR may have the lead in drug trials, the company is still relatively early in the development process and is nowhere near a product launch that could steer it toward regular recurring revenue. While all of these gene-editing leaders utilize the novel CRISPR/Cas9 technology for developing treatments for genetic diseases, investors should consider a diversified portfolio of gene-editing stocks as they all have soaring potential in the next five years.