recently, the international academic journalNucleic Acids Researchpublished online in the Chinese Academy of Sciences, Molecular Plant Sciences excellence and Innovation Center Jiang Weihong study group entitled“Developing an endogenous quorum-sensing based CRISPRi circuit for autonomous and tunable dynamic regulation of multiple targets inStreptomyces ”The research papers. The study in Streptomyces create a convenient, pervasive, self-driven dynamic control system, which can simultaneously for a plurality of genes strength of the adjustable dynamic transcriptional intervention, to effectively improve the purpose of the product the efficiency of the synthesis of microbial natural product of cell factory research and transformation provides a new strategy.

with the advent of synthetic biology, the rapid development, the traditional gene knockout and over-expression such as a static metabolic engineering means the limitations of the gradually emerging of new technologies, new strategies demand increasingly urgent. Can temporal and spatial specificity of the response of cells to environmental changes of a dynamic regulation system came into being, has become the optimization of microbial products potency of useful tools. However, the existing dynamic control system often need to through tedious testing and optimization process, it is difficult to simultaneously on multiple key nodes for differentiated control, which hinders them in industrial Microbiology in the application. Streptomyces as a class of important industrial microorganisms, capable of generating complex and diverse activity of natural products, such as the widely used antibiotics, antineoplastic and immunosuppressive agents, etc., for human health, agriculture and Livestock Development made a great contribution, but now the bacteria the genetic operations mainly through a static metabolic engineering, have limitations.

in this study, the authors in Streptomyces design and build a novel dynamic control system EQCi, by using a γ-butyrolactone signaling molecule in the response of the promoter to drivedCas9gene expression, skillfully endogenous quorum-sensing system and gene transcription inhibition technology CRISPRi for organic coupling. EQCi integrates both the technical advantages, while the metabolic pathway of multiple genes for full-auto, fine, dynamic adjustment, and simple operation, a wide range. The author chose to have anti-aging, anti-cancer and immunosuppressive and other biological activity important natural compounds—rapamycin as a target product, the use of EQCi remodeling of rapamycin industrial strains—rapamycin Streptomyces primary metabolism network. First, by downregulation of the tricarboxylic acid cycle pathways, fatty acid synthesis pathway and Shikimic acid pathway three primary metabolic pathways in the key nodes of gene transcription to increase the rapamycin biosynthetic precursor supply, significantly improves its potency. Further the use of EQCi system of the three pathways of metabolic flow for a combination of interventions, and for each node of the control strength for fine tuning to get the best engineering strains in rapamycin titer of 1836±191 mg/l, as currently reported at the highest level. With the starting strain compared to increases of about 660 percent. In addition, the authors also in other strains of Streptomyces—coelicolor were tested EQCi system, through the dynamic control of the tricarboxylic acid cycle in the key node, also a substantial increase in the secondary metabolites of actinomycetes violet red pigment production. These findings illustrate the dynamic regulation of the policy’s effectiveness. 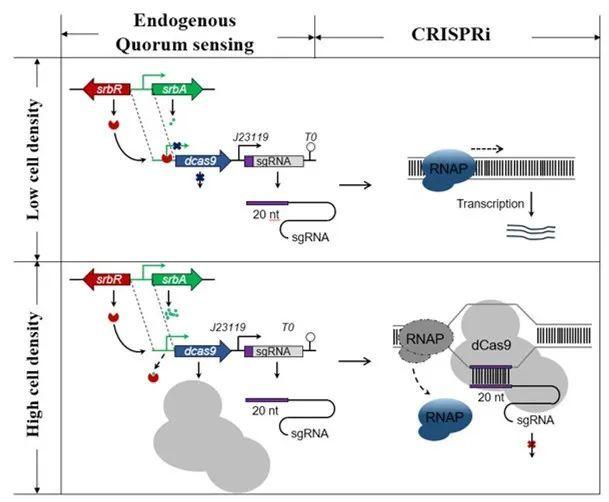 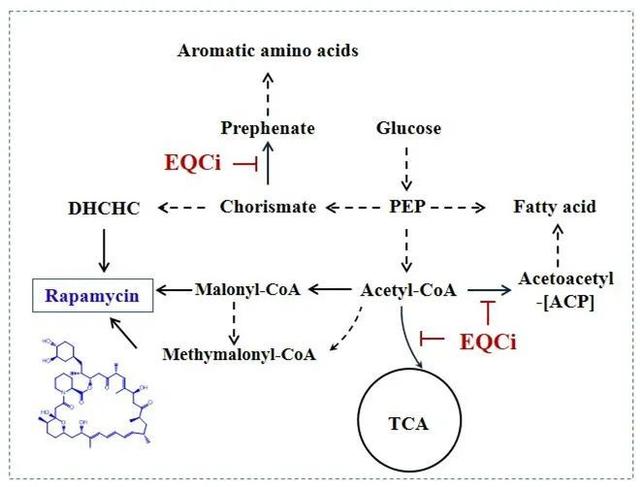 comparison of the experimental table���, Static regulation mediated primary metabolic suppression strategy will lead to cell growth is blocked, rapamycin production in sharp decline, and based on the EQCi system of dynamic new policy can not affect the cell growth of the cases improved significantly rapamycin titer, showing that the system effectively balancing the primary metabolism and product synthesis（secondary metabolism in the metabolic flux distribution. EQCi system of Streptomyces source of important secondary metabolites natural products cells factory building provides an efficient, General-purpose optimization strategies, and is expected to expand to other industrial microorganisms, the molecular breeding and transformation.