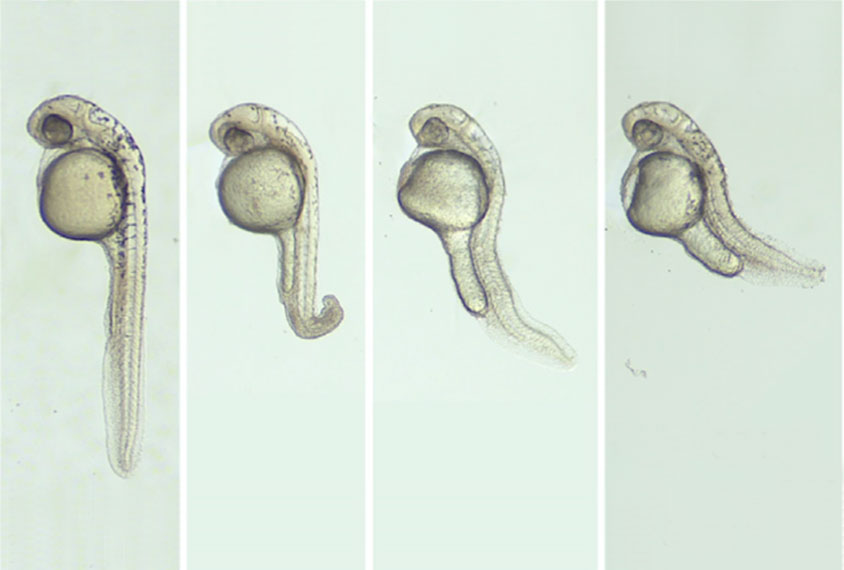 A new method that suppresses gene expression in the embryos of fish and mice may help researchers study autism genes in early development1.

The technique uses a modified version of the gene editor CRISPR to cut up and degrade messenger RNA (mRNA), the cell’s protein-building instructions, thereby curbing the expression of certain genes.

CRISPR systems typically use short sequences of RNA, called guide RNAs, to direct an enzyme to cut a target sequence of DNA. Scientists can use different types of enzymes in CRISPR systems, however, some of which cut RNA.

In the new study, researchers focused on an enzyme called Cas13, which scientists have used to degrade RNA in yeast, plant and mammal cells.

To test whether the enzyme could be used in living organisms, the team injected mRNA sequences encoding four variants of Cas13 — labeled RfxCas13d, PguCas13b, PspCas13b and LwaCas13a-GFP — into zebrafish embryos. Zebrafish share many genes with people, making them useful organisms in which to study autism genetics. Their embryos are also transparent, which allows researchers to observe development.

RfxCas13d, also known as Cas13d, is the only variant that was effectively translated into protein and did not cause deformities in the embryos, the researchers say.

Next, the team tested Cas13d’s ability to dampen the expression of various mRNA sequences. In one experiment, they injected embryos with mRNAs encoding Cas13d and two fluorescent proteins, red and green, along with guide RNAs targeting the red fluorescent protein mRNA sequence. In another test, they injected Cas13d mRNA into embryos, along with guide RNAs targeting various genes that are involved in early development. They also sequenced all of the embryos’ RNA.

Across all the experiments, the system decreased targeted mRNA transcript levels by 76 percent, on average. It also produced anomalies, such as a missing tail or absent reproductive cells, typically caused by mutations in genes involved in early development, the researchers report.

The technique costs about 20 times less than morpholinos, synthetic molecules that scientists typically use to block gene expression in zebrafish. Morpholinos cost about $500 per vial and can have off-target effects and trigger an immune response, researchers say.

“It’s a game changer,” says Miguel Moreno-Mateos, assistant professor of molecular biology and biochemical engineering at Pablo de Olavide University in Spain, who co-led the research. The method is described in August in Developmental Cell.

Further testing demonstrated that the CRISPR-Cas13d system can be used in the embryos of two other fish species — medaka and killifish — and of mice. The system can also suppress mRNAs transcribed from the embryo’s genome as well as maternal mRNAs, which are present in embryos, control development in the early stages of life and are still poorly understood2.

The technique could help scientists explore the role of genes and maternal mRNAs in early development, the researchers say. It could also be used to study the effects of autism candidate genes.