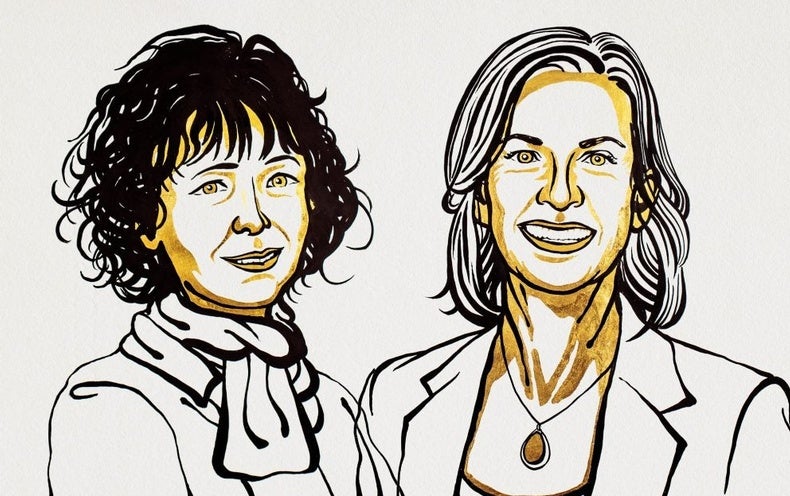 This year’s Nobel Prize in Chemistry was awarded for the discovery of the CRISPR/Cas9 gene editing system, which has—for the first time—enabled scientists to make precise changes in the long stretches of DNA that make up the code of life for many organisms, including people. The prize was shared by Emmanuelle Charpentier, a microbiologist and director of the Berlin-based Max Planck Unit for the Science of Pathogens, and Jennifer A. Doudna, a professor and biochemist at the University of California, Berkeley. The scientists will split the prize money of 10 million Swedish kronor, or a little more than $1.1 million.

This CRISPR tool, often described as “genetic scissors,” has been used by plant researchers to develop crops that withstand pests and drought, and it could transform agriculture. In medicine, the method is involved in clinical trials of new cancer therapies. And researchers are trying to employ it to cure certain inherited diseases. “It is being used all over science,” says Claes Gustafsson, chair of the Nobel Committee for Chemistry.

Nearly a decade ago Charpentier discovered a previously unknown molecule, tracrRNA, in bacteria. She learned that this molecule was part of an immune system in the microbes that helps them fight off viruses by cleaving viral DNA. The mechanism the microbes use to do so is called CRISPR. At about the same time, Doudna was mapping the cas proteins, a series of enzymes associated with CRISPR that snip apart DNA at specific spots. The two scientists began collaborating in 2011, after meeting at a conference in Puerto Rico where they went to a café in San Juan and talked about the overlap in their work. They succeeded in making these genetic scissors in a laboratory, and in reprogramming them to cut DNA at whatever spot the scientists selected.

This is the first time the chemistry Nobel has gone to two women. Charpentier, reached by phone this morning, said, “I’m very happy this prize goes to two women. I hope it provides a positive message for young girls, young women, who wish to follow the path of science.” Doudna, speaking at a press conference earlier today, echoed that thought. “I’m delighted to inspire the next generation, if possible,” she said.

Luis Echegoyen, president of the American Chemical Society, notes that “for a long time women have been nominated, but few have obtained the prize.” The Nobels began in 1901, and there were only five female winners in chemistry before Charpentier and Doudna. This disparity reflected a bias against women rather than the quality of their science, Echegoyen says. Times may be changing, however: Frances Arnold of the California Institute of Technology won the chemistry award in 2018 for her work on directed evolution.

CRISPR “is very selective, very exquisite chemistry,” Echegoyen says. “Knowing the chemistry behind things allows you to control the biology. And it lets you understand the different functions of genes. Charpentier and Doudna were absolutely at the core of this discovery.” A third scientist, Feng Zhang of the Broad Institute of the Massachusetts Institute of Technology and Harvard University, has also claimed major credit for work on CRISPR’s discovery and use. And the dispute is currently being waged in legal battles over U.S. patents. But the Nobel committee did not mention Zhang and focused solely on Charpentier and Doudna. The duo has been on a prizewinning streak: During the past five years, the two won a Breakthrough Prize in Life Sciences, a Wolf Prize in Medicine and a Kavli Prize in Nanoscience (that last award was shared with Virginijus Šikšnys, a biochemist who worked on CRISPR independently.) They were also named Japan Prize winners.

The Nobel chemistry committee felt that Charpentier and Doudna’s work, though relatively recent, “had already benefited humankind greatly,” said committee member Pernilla Wittung Stafshede during today’s announcement. There are already many dozens of applications. Angela Zhou, an information scientist at CAS (Chemical Abstracts Service), a division of the American Chemical Society that tracks discoveries and technologies in that field through mentions in journals and patents, says a few of them stand out. CRISPR, she says, has been used to “modify immune cells to make them more effective at destroying cancer cells and to remove the HIV virus when it has integrated itself into the human genome. And CRISPR-based drugs are being developed to treat heart disease, blood disorders and blindness.”

In her press conference, Doudna said that it is relatively easy to get the genome editing molecules into eye cells and blood cells, so genetic eye diseases and blood illnesses such as sickle cell disease are most amenable to CRISPR-based therapies. “Further out, it can be used on neurodegenerative diseases, where there is a great need,” she said. Amid the COVID-19 pandemic, the technology is being used to develop diagnostic tests to detect the novel coronavirus. Charpentier also noted that CRISPR is now being employed in basic research on the virus to search for molecules that help the pathogen replicate.

The use of CRISPR has generated significant controversy in addition to plaudits, Doudna acknowledged. Scientists have utilized the technique to edit genes in human sperm and egg cells. And a researcher in China used gene editing on viable human embryos, creating a storm of condemnation and worry about babies “designed” to have particular qualities. “It’s important to have responsible use of this technology in the future,” said Doudna, who has been involved in scientific groups that have crafted ethical guidelines. She supports making careful changes to sperm and egg cells for therapeutic purposes—to prevent inherited diseases—but opposes employing CRISPR or related techniques for human enhancement.

Both scientists said they were not expecting to hear from Sweden this morning. Charpentier, calling in to the Nobel announcement, acknowledged that her name and Doudna’s had surfaced as potential winners in recent years. “It was mentioned to me a number of times, perhaps more than I would like,” she said. Still, she noted, she had not thought this would be her year. “When I got the call this morning I was very emotional. I was surprised,” Charpentier said. But “it’s real now.”

Editor’s Note (10/7/20): This article has been updated after posting to include comments from Luis Echegoyen, Pernilla Wittung Stafshede and Jennifer A. Doudna.