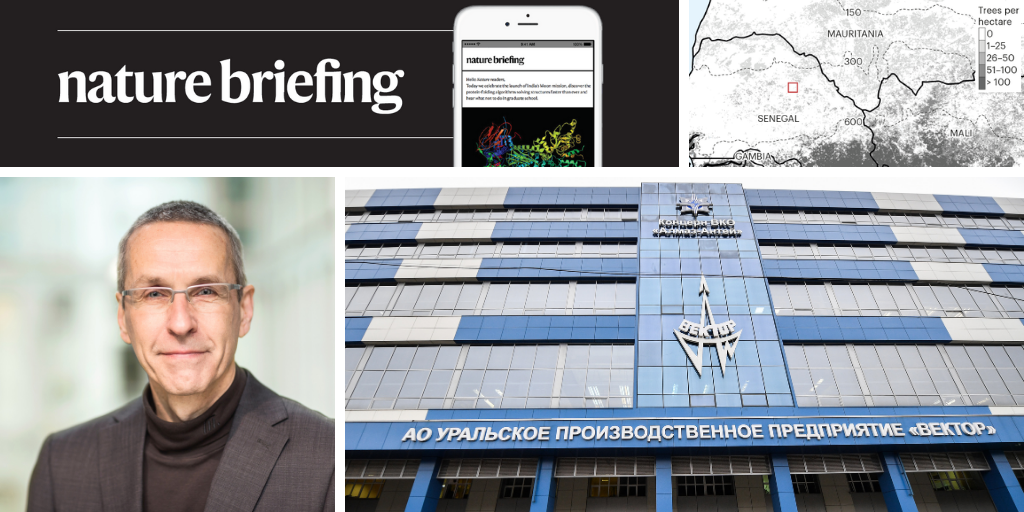 Hello Nature readers, would you like to get this Briefing in your inbox free every day? Sign up here

Russian President Vladimir Putin has announced the approval of a second coronavirus vaccine. The vaccine, EpiVacCorona, was described as a “peptide-based shot”. It was developed by biotechnology company State Research Center of Virology and Biotechnology VECTOR. Early trials of the vaccine on 100 volunteers were successful, said Putin. But the vaccine has not been subject to full safety and efficacy trials.

Two huge pieces of space junk — a defunct Soviet navigation satellite called Parus (or Kosmos 2004) and a Chinese rocket stage — are at risk of colliding tonight. US tracking company LeoLabs says there is more than a 10% chance of a crash, which would spread dangerous debris in low Earth orbit.

Adjusting incentives, building a tool for anonymous reporting and encouraging more use of electronic laboratory notebooks are among the initiatives that the QUEST Center at the Berlin Institute of Health has taken to improve the trustworthiness, usefulness and ethics of research. Ulrich Dirnagl, who directs the QUEST Center, outlines how the system works, how they got funding and how things are going so far.

Two years after the long-awaited appointment of respected meteorologist and experienced policy adviser Kelvin Droegemeier as the science adviser to US President Donald Trump, “cheers have been replaced by private handwringing”, writes Science. Scientists are concerned that Droegemeier has done little to mitigate the Trump administration’s poor COVID-19 response or its disappointing track record on science funding, environmental regulation and visas for skilled workers. But Droegemeier has had some modest achievements, and scientists remain hopeful that his low profile will prove advantageous in a notoriously combative White House.

The next big CRISPR advance could be regulating genes rather than permanently changing them, says biochemist Jennifer Doudna. Fresh off winning the Nobel Prize in Chemistry for the technique, Doudna shares her thoughts about the future of CRISPR and the rapid COVID-19 tests being developed by her company, Mammoth Biosciences.

If scientists think too mechanistically about cells, bioengineering will come grinding to a halt, argue biologist Michael Levin and philosopher Daniel Dennett. Cells — and tissues and brainless whole organisms — are agents with their own information-processing competency that lets them ‘decide’ where to go, what signals to release and what cells to stick to, write Levin and Dennet. If we ignore that, we will try and fail to micromanage cells into functional organs, and we won’t know which genes to edit when creating organs for transplantation. “Treating cells like dumb bricks to be micromanaged is playing the game with our hands tied behind our backs,” the authors say. They do set limits on cell cognition, however. Cells are like “idiot savants with some amazing talents but no insight at all into those talents”.

An analysis of satellite images has pinpointed individual tree canopies over a large area of West Africa. The data suggest that it will soon be possible, with certain limitations, to map the location and size of every tree worldwide. Remote-sensing scientists Niall Hanan and Julius Anchang dig into the research done by ecologist Martin Brandt and colleagues.

Quote of the day

Climate scientist Joëlle Gergis gives a heart-rending account of her feelings following the ‘Black Summer’ of fires and coral bleaching in her native country of Australia. (The Guardian | 11 min read)