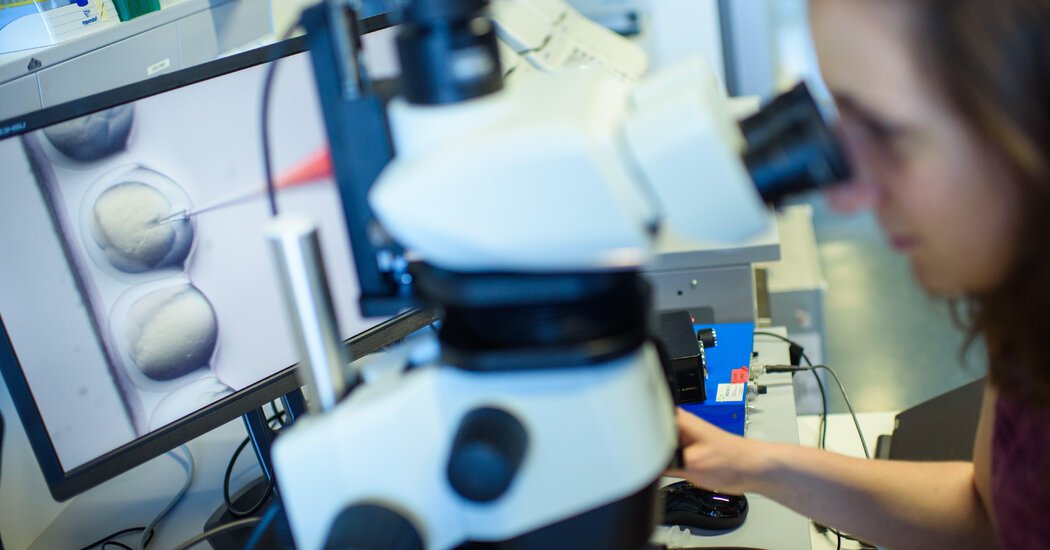 A powerful gene-editing tool called Crispr-Cas9, which this month nabbed the Nobel Prize in Chemistry for two women scientists, can cause serious side-effects in the cells of human embryos, prompting them to discard large chunks of their genetic material, a new study has found.

Administered to cells to repair a mutation that can cause hereditary blindness, the Crispr-Cas9 technology appeared to wreak genetic havoc in about half the specimens that the researchers examined, according to a study published in the journal Cell on Thursday.

The consequences of these errors can be quite serious in some cases, said Dieter Egli, a geneticist at Columbia University and an author of the study. Some cells were so flummoxed by the alterations that they simply gave up on trying to fix them, jettisoning entire chromosomes, the units into which human DNA is packaged, Dr. Egli said.

“We’re often used to hearing about papers where Crispr is very successful,” said Nicole Kaplan, a geneticist at New York University who was not involved in the study. “But with the amount of power we hold” with this tool, Dr. Kaplan said, it is crucial “to understand consequences we didn’t intend.”

Crispr-Cas9, a scissors-like chemical tool that can precisely cut and customize stretches of genetic material, such as human DNA, stoked international controversy in 2018 when He Jiankui, a Chinese scientist, used the technology to yield the world’s first gene-edited infants. The experiment was widely condemned as irresponsible and dangerous — in large part because many of the ways in which Crispr-Cas9 can affect cells remain poorly understood. Dr. He was found guilty of conducting illegal medical practices in China and sentenced to three years in prison.

The new paper’s findings further underscore that “it’s really too soon to be applying Crispr to reproductive genetics,” said Nita Farahany, a bioethicist at Duke University who was not involved in the study.

Crispr-Cas9 treatments have already been given directly to people to treat conditions like blindness — a potential cure that affects that patient, and that patient only. But modifications made to sperm, eggs and embryos can be passed to future generations, raising the stakes for any mistakes made along the way.

Although scientists have been tinkering with genomes for decades, Crispr-Cas9 can accomplish a precise type of genetic surgery that other tools cannot.

Scientists can use Crispr-Cas9 to home in on a specific region of the genome and snip it in two. Sensing trouble, the cell rushes to heal its genetic wound, sometimes using a similar-looking stretch of nearby, intact DNA as a template as it stitches the pieces back together. This gives researchers an opportunity to splice in a tailor-made template of their own, in the hopes that the cell will incorporate the intended change.

In 2017, a team of researchers led by Shoukhrat Mitalipov, a geneticist at Oregon Health and Science University in Portland, reported that human embryos carrying a mutation could be coaxed into this process without a synthetic template. The researchers generated embryos from a union between two cells: a sperm carrying a mutation that can make it harder for the heart to pump blood, and an egg with a healthy version of the gene. Dr. Mitalipov and his team used Crispr-Cas9 to cut the broken copy of the gene to see if the intact version would guide its repair. They reported the experiment a success and published it in the journal Nature.

“In principle, this could be a way to correct a mutation in a human embryo” that has only one broken copy of a gene, Dr. Egli said.

But the new findings could cast some doubt on the 2017 work, Dr. Egli added.

The researchers of the Cell study focused on a different mutation — one that causes hereditary blindness and affects a different part of the genome — but adopted a similar setup. Using donated sperm containing a mutation in a gene called EYS, they fertilized eggs that had normal copies of EYS, then sent in Crispr-Cas9 to snip the mutation.

Several of the cells managed to sew the Crispr-cut pieces of DNA back together with a few minor changes, Dr. Egli said.

But about half the embryos seemed unable to cope with the trauma of the break. The genetic damage failed to heal, eventually forcing cells to tear off and toss aside large chunks of the chromosome that harbored the mutated EYS. In some cells, the entire chromosome was lost.

“That is not a correction,” Dr. Egli said. “That is a vastly different outcome.”

Instead of gently goading the cell into editing the genetic “text” at which it was targeted, the Crispr machinery gouged irreparable gaps in cells’ DNA, said Maria Jasin, a geneticist at Memorial Sloan Kettering Cancer Center and another author of the study. The negative consequences of this, she added, were disproportionately disastrous. “They were talking about trying to repair one gene, and you have a substantial fraction of the genome being changed,” Dr. Jasin said.

Dr. Egli and Dr. Jasin said that this probably happened in Dr. Mitalipov’s 2017 paper as well, but it went unnoticed. After Dr. Mitalipov’s team carried out their Crispr-Cas9 treatment, they could no longer detect the mutation in embryos. But Dr. Egli and Dr. Jasin noted that, technically, dumping or destroying a huge segment of a chromosome would have wiped out evidence of the mutation as well. Dr. Mitalipov and his team, they said, might have mistaken a deletion for an edit.

Dr. Mitalipov disagreed with this interpretation, and he said the new paper’s conclusions were not fully backed up by the necessary data. “They don’t have evidence to show these are deletions,” he said. Far more complex experiments, he said, would be needed to conclusively distinguish a “corrected” chromosome from an absent one.

Dr. Kaplan, of New York University, said she found the new paper’s findings convincing. And she, like all of the other experts who spoke with The New York Times, echoed a crucial sentiment: that Crispr-editing embryos in the clinic must remain a far-off reality, if it is ever approved at all.

“At this point, it’s too dangerous,” Dr. Jasin said. “We’re just not sure which way things are going to go.”

The U.S. government does not permit the use of federal funds to conduct research on human embryos. Dr. Egli’s team sought private funding from the New York Stem Cell Foundation and the Russell Berrie Foundation Program in cellular therapies to run its experiments.

Other Crispr-based technologies exist that could circumvent several of the issues the team identified. For example, some researchers have developed techniques that allow them to make less drastic cuts to the genome and tinker with just one genetic letter at a time.

Given his team’s findings, Dr. Egli also floated the idea that the blunter version of Crispr-Cas9 could someday be deployed as a sort of molecular bomb: shredding and eliminating unwanted, extra chromosomes when they appear in embryos.

Dr. Farahany, of Duke University, urged caution. The new study, she said, only builds upon the notion that scientists will need to walk, not run, in developing Crispr tools for reproductive medicine.

“We have a long way to go,” Dr. Farahany said. “Until we can figure out what the off-target effects are, and how we can control for them,” embryo editing of any kind “would be deeply unethical.”