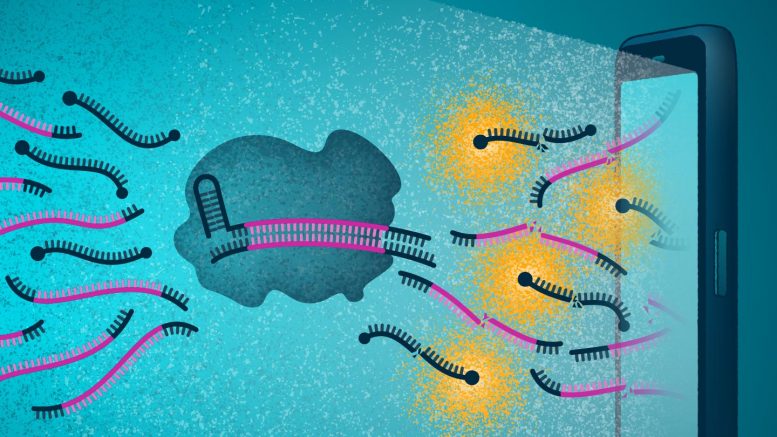 Imagine swabbing your nostrils, putting the swab in a device, and getting a read-out on your phone in 15 to 30 minutes that tells you if you are infected with the COVID-19 virus. This has been the vision for a team of scientists at Gladstone Institutes, University of California, Berkeley (UC Berkeley), and University of California, San Francisco (UCSF). And now, they report a scientific breakthrough that brings them closer to making this vision a reality.

One of the major hurdles to combating the COVID-19 pandemic and fully reopening communities across the country is the availability of mass rapid testing. Knowing who is infected would provide valuable insights about the potential spread and threat of the virus for policymakers and citizens alike.

Yet, people must often wait several days for their results, or even longer when there is a backlog in processing lab tests. And, the situation is worsened by the fact that most infected people have mild or no symptoms, yet still carry and spread the virus.

In a new study published in the scientific journal Cell, the team from Gladstone, UC Berkeley, and UCSF has outlined the technology for a CRISPR-based test for COVID-19 that uses a smartphone camera to provide accurate results in under 30 minutes. 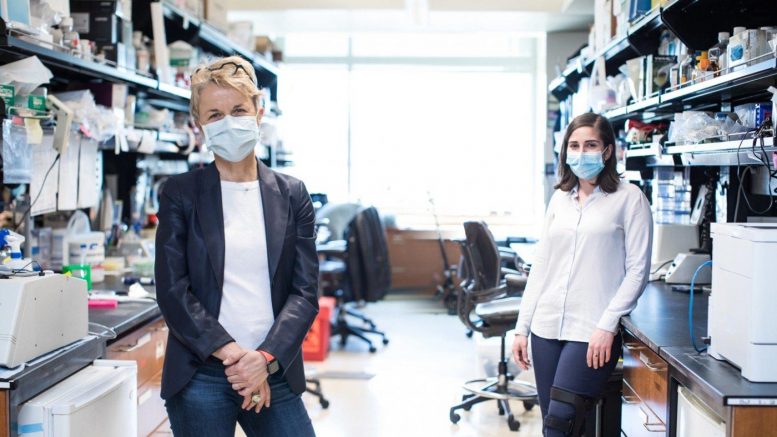 A team of scientists from Gladstone, UC Berkeley, and UC San Francisco, including Melanie Ott (left) and Parinaz Fozouni (right), outlined the technology for a rapid, one-step mobile test that could help combat the pandemic and fully reopen communities. Credit: Gladstone Institutes

“It has been an urgent task for the scientific community to not only increase testing, but also to provide new testing options,” says Melanie Ott, MD, PhD, director of the Gladstone Institute of Virology and one of the leaders of the study. “The assay we developed could provide rapid, low-cost testing to help control the spread of COVID-19.”

The technique was designed in collaboration with UC Berkeley bioengineer Daniel Fletcher, PhD, as well as Jennifer Doudna, PhD, who is a senior investigator at Gladstone, a professor at UC Berkeley, president of the Innovative Genomics Institute, and an investigator of the Howard Hughes Medical Institute. Doudna recently won the 2020 Nobel Prize in Chemistry for co-discovering CRISPR-Cas genome editing, the technology that underlies this work.

Not only can their new diagnostic test generate a positive or negative result, it also measures the viral load (or the concentration of SARS-CoV-2, the virus that causes COVID-19) in a given sample.

“When coupled with repeated testing, measuring viral load could help determine whether an infection is increasing or decreasing,” says Fletcher, who is also a Chan Zuckerberg Biohub Investigator. “Monitoring the course of a patient’s infection could help health care professionals estimate the stage of infection and predict, in real time, how long is likely needed for recovery.”

A Simpler Test through Direct Detection

Current COVID-19 tests use a method called quantitative PCR—the gold standard of testing. However, one of the issues with using this technique to test for SARS-CoV-2 is that it requires DNA. Coronavirus is an RNA virus, which means that to use the PCR approach, the viral RNA must first be converted to DNA. In addition, this technique relies on a two-step chemical reaction, including an amplification step to provide enough of the DNA to make it detectable. So, current tests typically need trained users, specialized reagents, and cumbersome lab equipment, which severely limits where testing can occur and causes delays in receiving results.

As an alternative to PCR, scientists are developing testing strategies based on the gene-editing technology CRISPR, which excels at specifically identifying genetic material.

All CRISPR diagnostics to date have required that the viral RNA be converted to DNA and amplified before it can be detected, adding time and complexity. In contrast, the novel approach described in this recent study skips all the conversion and amplification steps, using CRISPR to directly detect the viral RNA.

“One reason we’re excited about CRISPR-based diagnostics is the potential for quick, accurate results at the point of need,” says Doudna. “This is especially helpful in places with limited access to testing, or when frequent, rapid testing is needed. It could eliminate a lot of the bottlenecks we’ve seen with COVID-19.” 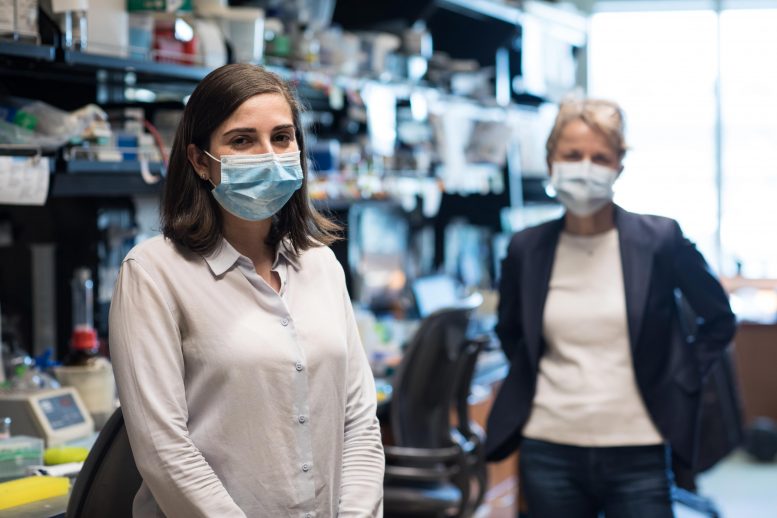 Parinaz Fozouni, a UCSF graduate student working in Ott’s lab at Gladstone, had been working on an RNA detection system for HIV for the past few years. But in January 2020, when it became clear that the coronavirus was becoming a bigger issue globally and that testing was a potential pitfall, she and her colleagues decided to shift their focus to COVID-19.

“We knew the assay we were developing would be a logical fit to help the crisis by allowing rapid testing with minimal resources,” says Fozouni, who is co-first author of the paper, along with Sungmin Son and María Díaz de León Derby from Fletcher’s team at UC Berkeley. “Instead of the well-known CRISPR protein called Cas9, which recognizes and cleaves DNA, we used Cas13, which cleaves RNA.”

In the new test, the Cas13 protein is combined with a reporter molecule that becomes fluorescent when cut, and then mixed with a patient sample from a nasal swab. The sample is placed in a device that attaches to a smartphone. If the sample contains RNA from SARS-CoV-2, Cas13 will be activated and will cut the reporter molecule, causing the emission of a fluorescent signal. Then, the smartphone camera, essentially converted into a microscope, can detect the fluorescence and report that a swab tested positive for the virus.

“What really makes this test unique is that it uses a one-step reaction to directly test the viral RNA, as opposed to the two-step process in traditional PCR tests,” says Ott, who is also a professor in the Department of Medicine at UCSF. “The simpler chemistry, paired with the smartphone camera, cuts down detection time and doesn’t require complex lab equipment. It also allows the test to yield quantitative measurements rather than simply a positive or negative result.”

The researchers also say that their assay could be adapted to a variety of mobile phones, making the technology easily accessible.

“We chose to use mobile phones as the basis for our detection device since they have intuitive user interfaces and highly sensitive cameras that we can use to detect fluorescence,” explains Fletcher. “Mobile phones are also mass-produced and cost-effective, demonstrating that specialized lab instruments aren’t necessary for this assay.”

Accurate and Quick Results to Limit the Pandemic

When the scientists tested their device using patient samples, they confirmed that it could provide a very fast turnaround time of results for samples with clinically relevant viral loads. In fact, the device accurately detected a set of positive samples in under 5 minutes. For samples with a low viral load, the device required up to 30 minutes to distinguish it from a negative test.

“Recent models of SARS-CoV-2 suggest that frequent testing with a fast turnaround time is what we need to overcome the current pandemic,” says Ott. “We hope that with increased testing, we can avoid lockdowns and protect the most vulnerable populations.”

Not only does the new CRISPR-based test offer a promising option for rapid testing, but by using a smartphone and avoiding the need for bulky lab equipment, it has the potential to become portable and eventually be made available for point-of-care or even at-home use. And, it could also be expanded to diagnose other respiratory viruses beyond SARS-CoV-2.

In addition, the high sensitivity of smartphone cameras, together with their connectivity, GPS, and data-processing capabilities, have made them attractive tools for diagnosing disease in low-resource regions.

“We hope to develop our test into a device that could instantly upload results into cloud-based systems while maintaining patient privacy, which would be important for contact tracing and epidemiologic studies,” Ott says. “This type of smartphone-based diagnostic test could play a crucial role in controlling the current and future pandemics.”

The research was supported by the National Institutes of Health (NIAID grant 5R61AI140465-03 and NIDA grant 1R61DA048444-01); the NIH Rapid Acceleration of Diagnostics (RADx) program; the National Heart, Lung, and Blood Institute; the National Institute of Biomedical Imaging and Bioengineering; the Department of Health and Human Services (Grant No. 3U54HL143541-02S1); as well as through philanthropic support from Fast Grants, the James B. Pendleton Charitable Trust, The Roddenberry Foundation, and multiple individual donors. This work was also made possible by a generous gift from an anonymous private donor in support of the ANCeR diagnostics consortium.