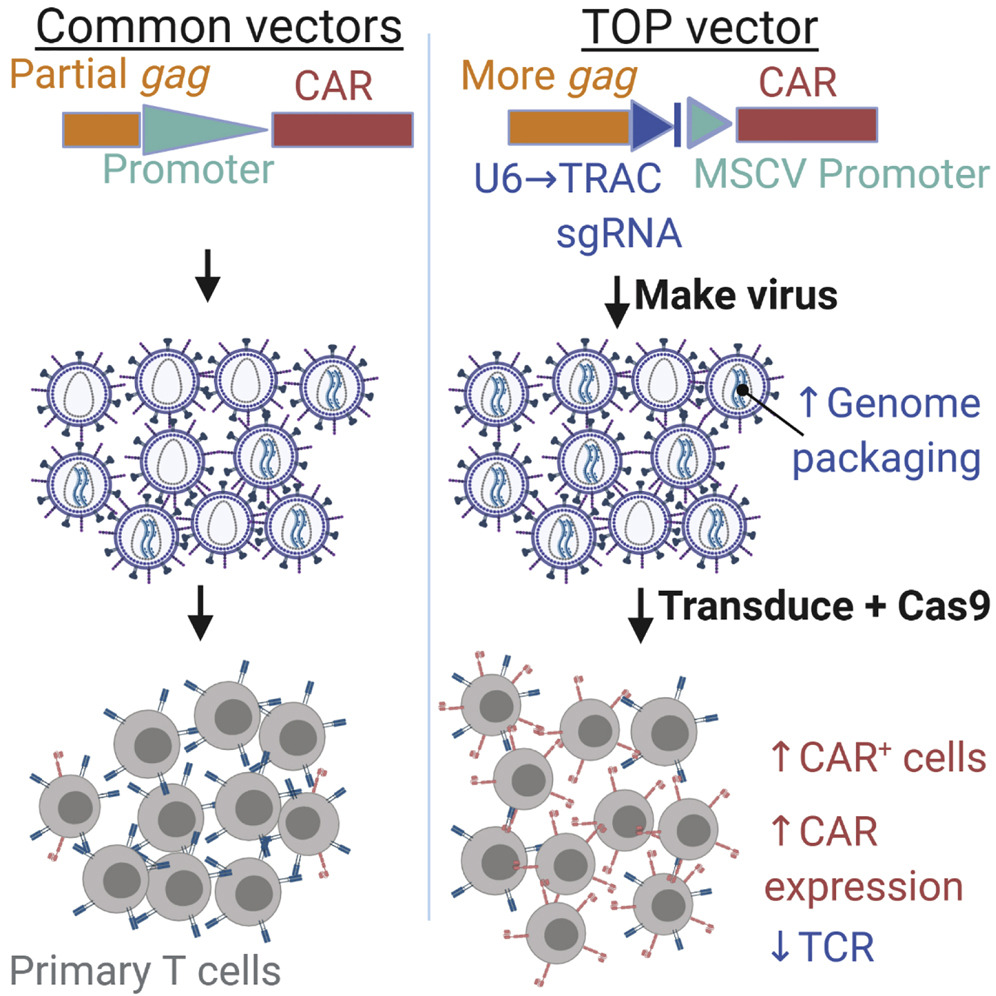 The last 10 years have witnessed the remarkable advancement of CRISPR-Cas9 technology from discovery to early development to its clinical application to treat various diseases. However, CRISPR-Cas9 gene editing in primary T cells, a key target for gene-engineering approaches, often results in low transduction and variable gene-editing efficiency. To date, lentiviral vectors delivering sgRNAs or transgenes are not optimal for use in primary cells. Researchers in the Overbaugh Lab, led by senior staff scientist Dr. Daryl Humes, have developed a ‘T cell optimized for packaging’ (TOP) vector to improve the delivery of gRNAs and transgenes into primary cells. Dr. Humes added, “The TOP vector was actually developed as part of the long process of adapting Dr. Molly Ohainle’s HIV-CRISPR screening method for use in primary CD4+ T cells to study the interferon response against HIV-1.” Their study, recently published in the journal Molecular Therapy: Methods & Clinical Development, demonstrates that the TOP vector has increased transduction efficiency compared to other commonly used lentiviral vectors in primary T cells.

To generate the TOP vector, the researchers combined a variety of modifications. First, they focused on improving the amount of virus that a vector can produce once introduced into cells, a property known as ‘virus titer.’ Starting with a lentiviral vector commonly used for gRNA delivery in CRISPR-Cas9 gene editing, Humes and colleagues replaced the original enhancer and polyadenylation signal sequences with others previously reported to work well in primary T cells. To complement these changes and further increase virus titer, the researchers then focused on increasing packaging of the vector genomes by extending a portion of the HIV gag region previously described to enhance genome packaging into nascent viral particles. Finally, the researchers generated a second version of the vector, removing a region with nucleotide characteristics known to increase recognition by a host restriction factor, whose activity reduces viral titer.

The researchers delivered the CRISPR-Cas9/gRNA complex into primary T cells in two steps: first, cells were transduced with the gRNA-expressing TOP vectors, and then CRISPR-Cas9 was delivered as a protein via electroporation. Using CD4+ T cells from six different donors, they evaluated the new constructs’ transduction and gene editing efficiencies. The TOP vectors tested had substantial improvement in virus titer yet showed only modest but significant gene editing improvement. The investigators then evaluated the performance of the vectors expressing a chimeric antigenic receptor (CAR), a synthetic receptor used to reprogram T cells to target and eliminate cancer cells. All TOP-CAR constructs tested had increased transduction efficiency in CD4+ and CD8+ T cells compared to a common lentiviral vector.

To test if the TOP vector could efficiently perform both editing and transgene expression, the investigators generated a construct expressing a CAR and a sgRNA targeting the genomic locus of an endogenous T cell receptor. Across five different T cell donors, transduction efficiencies were variable, but gene editing was consistently high. These findings demonstrate that the TOP vector can efficiently transduce and edit the genomes of primary T cells simultaneously, highlighting its potential in immunotherapy and related clinical applications. “It’s been rewarding to develop something that we believe could be useful in the context of gene therapy or immunotherapy, but the basic virologist in me is very excited by the fact that, with some further tweaks, the screen for which we initially envisioned using the vector is finally up and running.  It will be interesting to see what comes out of these screens in the next little while”, Dr. Humes added.

This work was supported by the National Institutes of Health.